Wildfire-fighting air tankers back in Penticton to prep for summer 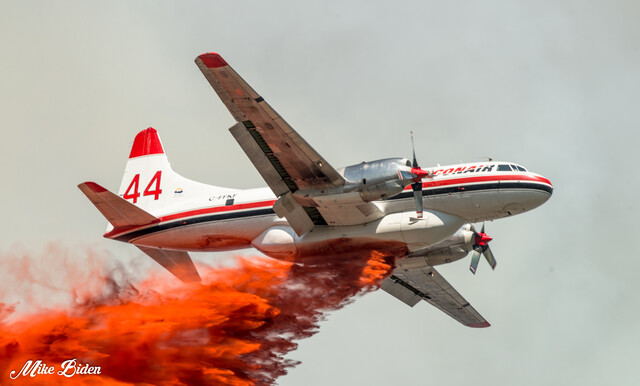 Photo: Mike Biden
A tanker at work in a previous fire season.

Pentictonites can expect to see plenty of activity in the skies and at the airport as wildfire-fighting tankers return to town to prepare ahead of the summer.

BC Wildfire Service dispatched the Penticton tanker group on Saturday, May 7, which will remain at the airport and in the area until early September or as long as required.

The public can expect to see them flying around in the coming weeks. BCWS information officer Karley Desrosires said given the current relatively cool weather and low fire activity, these actions will be mostly practice to retain operational readiness.

The planes will be ready to service the entire region should wildfires break out.

"If fire activity increases as we move into the season the group will be working on fire," Desrosires said.

"On average the Penticton tanker base is the second busiest base in BC for number of fire dispatches and retardant used."

In the Kamloops Fire Centre, which includes the entire Okanagan, 459 wildfires burned during the 2021 season, for a total of 497,497 hectares.