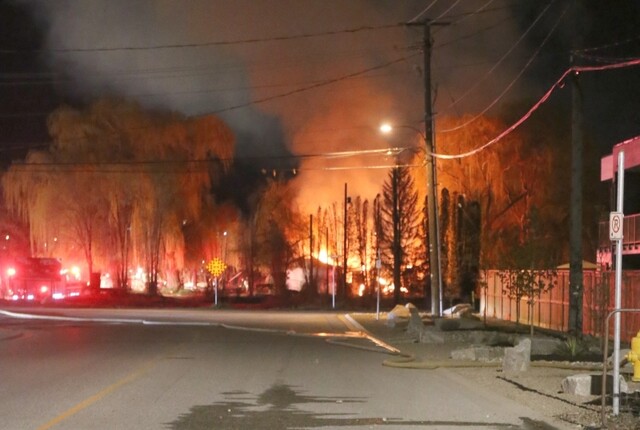 The cause of the large building fire in Oliver overnight is being considered “suspicious.”

A vacant residential home went up in flames just after midnight, prompting a response by the Oliver Fire Department.

Fire Chief Bob Graham says the vacant home was completely destroyed in the blaze, and a number of large willow trees near the home also caught fire.

“It had been vacant for about four or five years,” Graham said, adding that no one was injured in the fire.

The fire is currently under investigation, and no cause has been determined at this time.

A large building was destroyed by fire overnight in Oliver.

The blaze occurred just after midnight in an industrial area on the corner of Sawmill Road and Co-op Avenue.

While most of the Oliver Fire Department attended the fire, the large building was destroyed.

The fire also spread into nearby trees and bushes, but fire crews managed to get it under control.

The cause of the fire is not clear at this time.