SORCO takes in pair of great horned baby owls found on the ground, says spring has already been busy for rescues 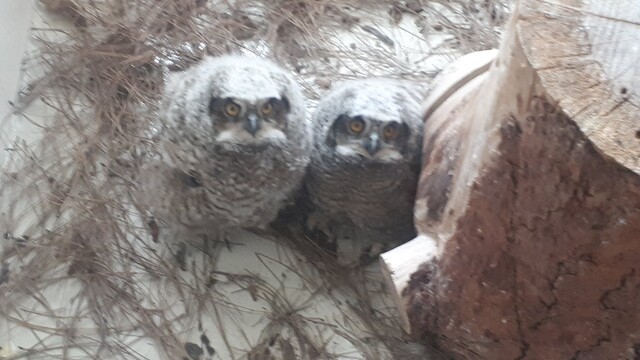 It is baby bird season in the Okanagan and the SORCO raptor rehabilitation centre in Oliver is already busy, taking in close to 20 young ones so far.

"We're getting them in all different ages. Like last week, we got one in that wasn't even 10 days old. So it's all over the place," SORCO manager Dale Belvedere said.

The rescue is asking residents to keep an eye out for any hurt or orphaned raptors — meaning birds of prey — not in their nests. The public is urged not to touch them.

"We can usually get somebody there within half an hour tops. So just please call us right away and we'll come and get them, do not touch them. The parents can get aggressive sometimes if they fear someone is harming their baby, so it's better somebody with experience goes in and gets the baby," Belvedere said.

Once the birds are picked up, SORCO will take them to look after them and release them back into the wild at a later date when they are ready.

Recently, the team picked up a pair of baby great horned owls found on the ground in the Kelowna area.

"The parents will care for them, they'll go down and feed them. But the danger is the predators, even with somebody walking their dog if it's on a trail or something. So we don't have a choice, they won't survive when they're on the ground," Belvedere explained.

The seven-week-old siblings, named Calvin and Hobbes by the rescue team, will stay for at least another eight weeks or so until they are flying adequately and hunting on their own.

Since they don't have a mate, the owls will be released in an appropriate area that the rescue knows isn't overpopulated with the birds already.

"We usually reach out to vineyards in that area because it's always a good source of food."

SORCO announced earlier this year that they had to cancel their annual open house once again, due to the ongoing pandemic.

To continue to help support SORCO's operations, people are encourage to continue to donate online and learn more about the birds in SORCO's care online here.