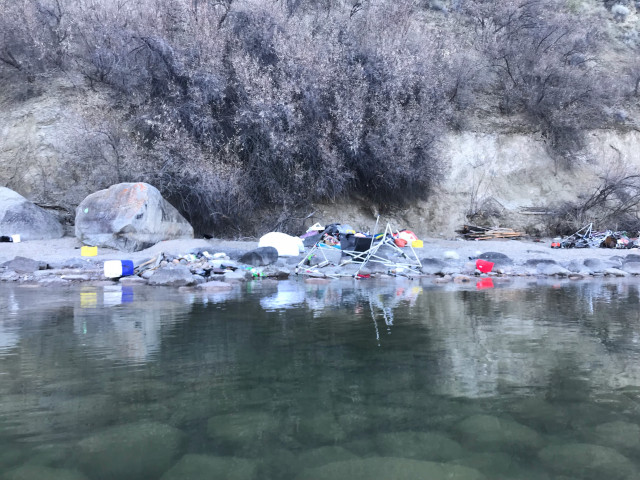 City crews are currently working on cleaning up abandoned items left by a frequently-returning homeless encampment in the Esplanade Trail area along Okanagan Lake northeast of the marina.

Piles of junk were left just along the lakeshore in the area dubbed by some locally as the "hobo trails," photographed by Penticton resident Don Kelly, who frequently kayaks the area.

The City of Penticton's Bylaw Department is well aware of the camps. It is an ongoing issue for them, conducting multiple cleanups yearly.

Bylaw services manager Tina Mercier said clean-up work for this iteration of the encampment began on March 30, after officers provided several notifications to the campers.

Crews moved five boat loads of abandoned items and filled one dumpster and one truck. Contents included structures, mattresses, couches, lounge furniture and the like, and debris still remains.

"This area is naturally sensitive and camps are located quite far out and close to the water line making it difficult to access for everyone - including emergency services for any life saving measures, city boat access," Mercier said.

One concern heading into springtime, as snow melt begins, is an influx of water into Okanagan Lake.

"We are planning to attend again soon to have the remainder of the debris cleaned up before water levels rise," Mercier said.

Bylaw frequently patrols the area in the spring and summer, and has historically used those patrols as an opportunity to keep a tab on homeless numbers and connect individuals to community resources, when desired.

For Kelly, it's disappointing to see the cycle repeat again and again. He hopes to bring light to the issue in the hope of sparking more permanent action.

"Usually a few weeks later they are back and the [removal] process is renewed," Kelly said.

"Lots of time spent, money spent, and garbage and sewage on that pristine lakeshore."