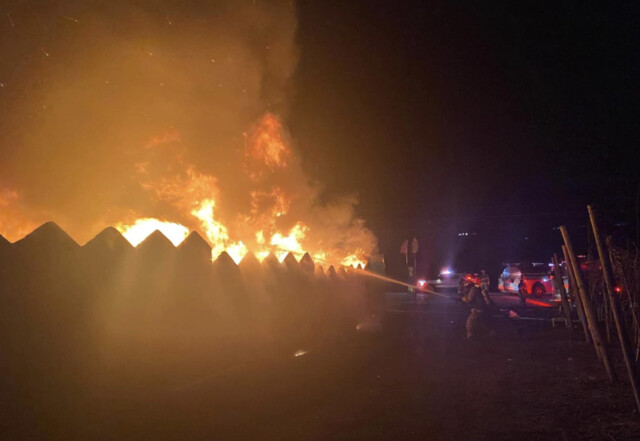 The Oliver Fire Department had their hands full overnight Sunday when a storage facility at Oliver Global Grocers went up in flames.

The popular grocery was alerted they needed to evacuate at around 10 p.m. when a customer driving by noticed smoke. A massive fire quickly got hold of their wooden fence, storage area and another part of the structure.

High winds at the time pushed the fire towards the rest of the structures, making the fight especially difficult.

"Firefighters were able to knock down the fire and prevent it from extending into the main grocery store section of the building. Firefighters were on scene for several hours battling the blaze. A crew from Osoyoos Fire was requested for mutual aid," the fire department explained in a press release.

The fire has been deemed suspicious and an investigation will follow.

This is the second suspicious fire at an Oliver business in recent weeks. The Pot Doctor went up in flames in late February, with an arsonist caught on camera.

Fire crews also responded overnight Sunday to a vehicle fire in the area of School Avenue, which was quickly knocked down, and no relation between the two fires is suspected at this time, though the car fire is suspected arson.

The family who owns Oliver Global Grocers took to social media to share updates and thank their community and customers for an outpouring of support.

"Our son, our pets, house and our business is safe!" they wrote.

"Thank you once again to the firefighters, RCMP, paramedics , to our customer who was passing by and spotted the fire burning and alerted everyone. We are forever grateful."