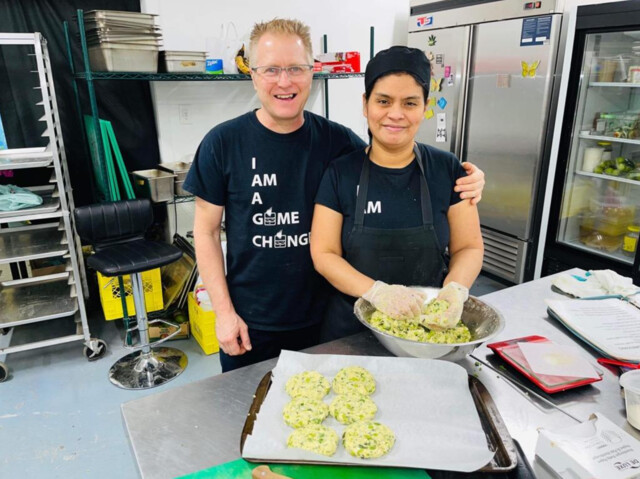 "Okanagan Inspired" is a weekly series of profiles offering a peek into the stories and inspirations of South Okanagan residents who hold creative roles in the community.

Getting creative through culinary designs and a passion for vegan living are the driving forces behind a Penticton husband-wife entrepreneur team.

Originally from El Salvador, Yesenia McWhinney has been living in Canada for the past 37 years, first arriving when she was 13. She then moved to Penticton on her own with her kids.

“My very good friend from high school had moved to Penticton a year before, and she told me how beautiful the city and the lakes were. We love the beach and the summertime and camping. We love the farmers market, but the beach has a special place in our hearts,” explains Yesenia.

And one particular day at the beach with her children in 2006 had something special in store.

“I was there with my son, and she had her four children on the beach, right by the Peach. My son started playing with her kids and making sandcastles, and little did I know their mom was my future wife," Darren says.

While working at the Wheatgrass Cafe at the Wholefoods Market, Daren saw an opportunity to add healthy, creative, vegan options to the Penticton community.

“While working at the Wheatgrass Cafe, a man would come in and always be upset that we didn't offer vegan options. Everyone avoided him, but we became friends. The name the Angry Vegan is for him,” Daren says, laughing.

Originally opening at the Barefoot Beach Resort in 2017, the Angry Vegan initially offered a range of healthy and nourishing juices to help with ailments and overall health.

That eventually grew into an eatery downtown, earning fans from all lifestyles ?— not just vegans.

"After we first opened, they were doing construction nearby and one of the workers hadn’t brought his lunch. The only place he could find was the Angry Vegan. He was worried about trying vegan food, but he was starving so he gave us a go,” says Yesenia.

“He had a burger and fries and a smoothie, and he left full and satisfied and really happy! He told us he didn’t think that would happen. He came back many times with some of his work friends!"

Yesenia recently quit her long and successful career as a nurse manager to work full-time with Daren on the restaurant.

“I think vegan is the way to go,” says Yesenia. “I just changed how I am helping people with their health in a new way. I now anchor the kitchen! I am the cook."

Although the vegan lifestyle may seem difficult to some, the McWhinneys believe in its importance for the planet, for individuals' health and to reduce animal suffering. Anecdotally, they share that they have had customers report being able to go off medication for conditions like high cholesterol, inflammation and pain after switching to the vegan lifestyle.

And if you're curious, you don't have to quit meat cold turkey.

“You can start going meatless one day a week. You don’t need to become a vegan in one day,” says Yesenia.

“Try the Angry Vegan and see that you like the food. You can have a beautiful dinner without meat. We just made Daren’s mother Irene’s scalloped potatoes, but without dairy. They are delicious and you wouldn’t know the difference. Many non-vegans still really enjoy our food."

For those wanting to try implementing more vegan foods into their diets, the Angry Vegan also has meal plans that keep things fresh and exciting.

While they enjoy helping people with their health journeys, the McWhinneys also love being their own boss and having the freedom to create.

"We can create anything we like. We’ve been working on turning some of my El Salvadorian recipes vegan. The sky is the limit. Even though we work so many hours, and it can feel thankless, when we get people in the door saying thank you and that we make a difference, it’s a real pleasure. It keeps us going,” says Daren.

The Angry Vegan will also be involved in some new and fun opportunities in the community.

“We’re going to be at the Fest-of-Ale this year with some unexpected, fun stuff to eat,” says Daren.

And for those who party a bit too hard they also offer a morning energizing juice for the next day.

The vibe at the Angry Vegan is always a fun positive one with their two chihuahua-dachsunds, Tippy and Minnie, and their music taste reflects the fun.

“We play a lot of latin music. People love the beat. We get a lot of compliments and the customers are dancing to it while we get their food ready. We have a good southern vibe here,” says Yesenia. Their favourite song is We Are Family by Sister Sledge.

Angry Vegan is now located at 536 Main Street, a new location they opened in 2021 with a larger kitchen and capacity for some baking. They are open daily from 11 a.m. -7 p.m.

Know someone with a creative job in the South Okanagan who we should profile?

Email [email protected] with your nomination.