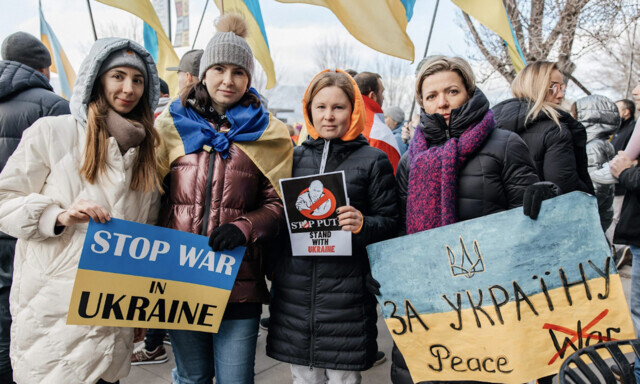 Raising money for humanitarian and military aid in Ukraine is a very close cause for the Penticton Lakeside Resort, since a group of their staff is from the country, many with family still there.

Elizabeth Cucnik, general manager of Lakeside Resort, herself has Ukrainian roots and felt it was necessary to do what they could, so they decided to organize a by-donation BBQ.

“We obviously have been shocked by what's happening in Ukraine and Russia, and, of course, in unison with a lot of countries and people around the world,” she said.

The Lakeside’s corporate association sales manager, Svitlana, is from the city of Chernihiv and moved to Canada in 2016. Her parents, her brother, all her friends from high school and university are still there.

“We're getting daily updates from her in terms of what's happening,” Cucnik explained.

“Her brother is fighting on the front line. He's been conscripted to fight for Ukraine as he's younger and unfortunately, he has no tactical gear. He doesn't have a helmet. He doesn't have any protective gear as well.”

Svitlana tried to get her family on a train out of the country on Wednesday morning during a planned ceasefire, but the bombing never stopped and they were unable to move out.

“The situation is incredibly dire, her family is hiding out in their home. They're being bombed every day.”

“I think her voice can speak for many voices, for millions of people that are dealing with this right now. So we really wanted to go above and beyond and try to do something for her, not just for her but for other Ukrainians, obviously within the community and on the ground there.”

The Barking Parrot will be hosting the BBQ to raise money for humanitarian and military aid in Ukraine, in partnership with the Ukrainian Canadian Volunteers Association of the Okanagan.

The Lakeside staff will be making and supplying the food, with the dinner being offered by donation.

The fundraiser guarantees a direct flow of money to the front lines in Ukraine, in the form of: bulletproof vests, tactical helmets, medical kits, clothes, batteries, flashlights, baby food, groceries, hospital equipment and supplies for seniors, and more.

The theme of the night is "Freedom on Fire."

Cucnik emphasized that they are not hosting this fundraiser because they are against Russia or the Russian people.

“It's really against Putin and his actions. What he is doing to both Russia and Ukraine,” she said.

“I think it's important for us, especially in Canada as well, who have not necessarily felt a war in our lifetime or had war on our soil, to wake up to this call of action. That we are, every one of us, interconnected to these global events.”

The BBQ will be Ukrainian-themed, so expect sausages, pierogies and more traditional food.