'We thought it was a bomb'

"We thought it was a bomb."

Lakeshore Drive residents Lorraine and her friend Bonnie had just gotten out of her car Monday afternoon shortly after 1:30 p.m. in the 400 block when they heard a "huge boom."

They turned towards 434 Lakeshore Drive, known as Warren House, and saw flames begin to shoot from the west side of the building.

"There was a lot of people running around, screaming, trying to find out if there's anybody inside," Lorraine recounted.

"It was pretty wild."

The pair ran into the neighbouring apartment where an elderly friend lives to make sure everyone was getting out as flames began to roar.

"It didn't take long at all [for the house to go up]," Lorraine said.

Bonnie then went alongside the house before it became too dangerous to be close by.

"It looked like a piece had flown out the size of a garage door, blown out, and glass right across the alley. I was still listening for any sign of life inside, and then someone started yelling 'Get out,' because there could be a secondary explosion," she said.

Lorraine added that the electrical wires on poles on the west side of the house started making a sparking noise.

Another woman who lives in a nearby apartment recalls hearing the explosion, and her whole place shook.

"I called my neighbour because she's an elderly lady, to see if she was okay," Liz explained.

"Then I looked out my windows and I saw police, and they were running."

Quickly, she learned about the fire, and scrambled to evacuate.

"So I was just saying a prayer that it doesn't pass [to the next building]. Because you see this building that's very close."

Another nearby resident told Castanet he felt the blast from half a block down Churchill Avenue; still another said the glass was shattered in his home a little ways down the alley.

Scores of people lined Lakeshore Drive and the back of the building off Churchill Avenue for over two hours watching the flames as fire crews worked to get the blaze under control.

Castanet will have an update from fire and police officials as soon as it is available.

There have been no reports of injuries from the fire at this time. 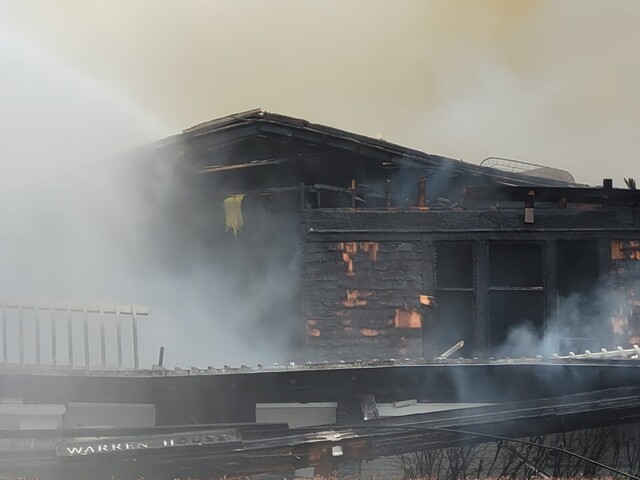 Fire crews have now mostly knocked down the flames, although fire crews are still actively battling the fire.

The historic home has been completely destroyed.

The home burning on Penticton’s Lakeshore Drive is one of the city’s oldest.

Known as the Warren House, it was constructed in 1912, according to Canada’s Historic Places.

The home was built for J.J. Warren, president of the Kettle Valley Railway, at the time. In recent years, it has operated as a bed and breakfast.

Fire crews are now dousing the adjacent apartment building in an effort to keep the flames from spreading.

The roof on the Warren House appears to have collapsed and flames are still visible. The home has been totally destroyed.

Neighbours of a home in the 400 block of Lakeshore Drive say they heard a loud explosion before a fire erupted.

“Everything trembled,” the neighbour told Castanet.

Firefighters are attacking the blaze from both Lakeshore Drive and from the near alleyway off Churchill Avenue.

A large crowd has turned out to watch. The entire area is blanketed in smoke. 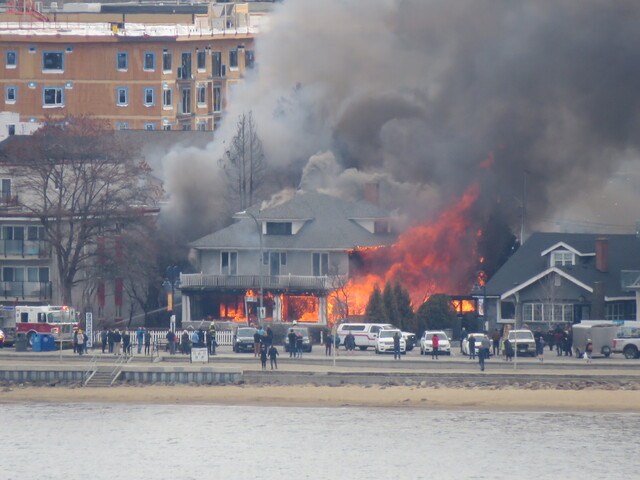 Castanet is on the way there. 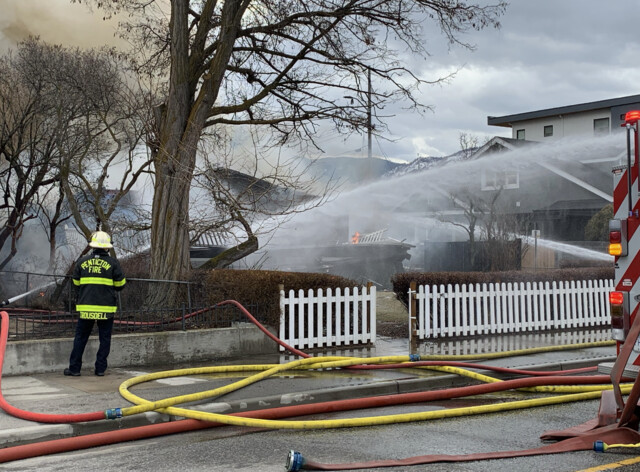