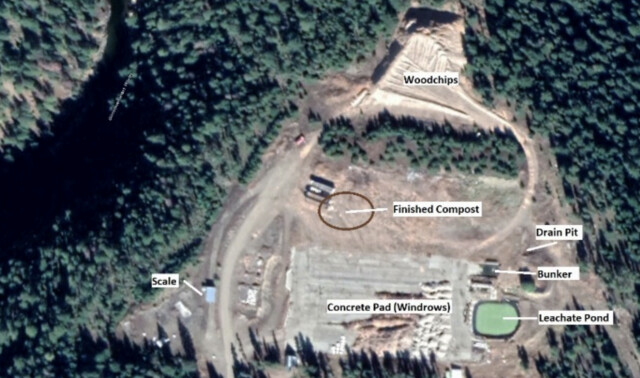 Photo: Contributed
An overview of the Net Zero Waste Eastgate site as included in the Ministry of Environment report.

A Ministry of Environment investigation has found a rural Princeton organics processing facility that received thousands of pig carcasses in December was operating out of compliance on a dozen counts — findings the site owner disputes.

In December, following devastating floods that left thousands of livestock animals dead in the Fraser Valley, locals spotted huge piles of dead hogs at the facility. The Upper Similkameen Indian Band raised environmental concerns, telling Castanet at the time they had concerns about carcasses stored improperly.

On Dec. 21, 2021, Ministry of Environment protection officers conducted an onsite inspection of the facility to verify compliance with organic matter recycling regulations.

A resulting warning letter to the facility, dated Jan. 18, 2022 and which includes results from the inspection, outlines the need to fix several aspects of the facility.

Concerns included accepting materials beyond their capacity, pig carcasses "dumped" off the receiving pad and not properly addressing leachate that had been pumped into a drain pit on multiple occasions.

In a statement to Castanet Wednesday, the Ministry said some of the non-compliance issues were related to the hog mortalities, though not all.

At this time, the Ministry has “no evidence to suggest that there is an immediate risk to human health or the environment"; however, the warning letter notes that corrective measures to the issues must be undertaken or Net Zero could face "escalating enforcement action."

The owner of Net Zero Waste, Mateo Ocejo, originally disputed the USIB claims, arguing that the facility was in full compliance with regulations and rules.

Robin Irwin, natural resources director for the USIB, said the Ministry report "confirms concerns that arose from USIB’s Dec. 10 site visit, [which] were publicly dismissed by the operator."

"Mr. Ocejo dismissed USIB as providing 'misinformation,' he indicated that his facility was operating within regulation and had done nothing wrong. This report concludes otherwise," she said, sharing her opinion.

"USIB’s interest in the situation at Net Zero Waste specifically relates to our role as stewards of the Upper Similkameen Traditional Territory. The main message here is that USIB is paying attention. We know what's happening on the ground and we take our guardianship role seriously."

When reached Wednesday, Ocejo confirmed he received the warning letter and said that he is working on submitting a response to the Ministry addressing the corrective measures requested. He disputed several claims in the Ministry report.

“They didn't observe any pollution. Most of the issues that they've identified are administrative or bureaucratic issues. A stamped drawing or labeling on one of the drawings or these types of things. So scale tickets, they've all been sent to them [with] all the original information," Ocejo said.

Issues raised in the report include finding a lack of documentation for testing and analysis on the facility site, concerns over the toxicity of the leachate and confirmation that pigs were left improperly stored on the ground.

Net Zero received material beyond their design capacity in December, according to the report.

“The plan submitted does not accurately reflect site conditions,” the report reads.

“The leachate management plan indicated that all receiving and curing occurs on the concrete pad area. However, during the Dec. 21, 2021 site inspection, loads of overs were observed being dumped on a gravelled area off the concrete pad. Untested finished compost is also stored off the pad.”

The report further notes that a worker on site said that "pig carcasses were dumped" on the gravel area when they first arrived.

“They took that out of context, from one of the workers,” Ocejo disputed. “They showed up at the facility unannounced, there was no notice, I didn't have any management on site, it was a few days before Christmas.”

“They asked a labourer a bunch of questions, and called him a site representative and a supervisor. I'm clarifying with them, should I be telling my staff not to answer their questions? If they're going to take those unqualified responses and put them in a report, because I've clarified things that they've listed in the report that are completely false.”

Ocejo admitted there were "only three loads that were off the pad for three days."

Net Zero was further found out of compliance in their curing areas designed to prevent the surface collection of water around the base of organic matter and compost.

When the site inspection took place, overs material and untested material were found not covered or on a prepared surface.

“The bunker receiving area which was full of dead pigs during the inspection was filled with liquid/ice, submerging the bottom layers of the carcasses," the report reads.

Within the compost facility, there was fault found within their leachate collection system design which operates to reuse or remove leachate.

“Site contact reported that leachate from the bunker area and leachate pond had been pumped into a pit excavated in gravel onsite and allowed to drain. They stated they probably shouldn’t be doing that,” the Ministry report reads.

Ocejo said they are happy to comply with further testing.

“If they want us to test something, we're more than happy to test anything to verify that there is no pollution and there has not been any pollution. And that's what we've said in our response to them,” Ocejo added.

The Ministry found that some areas of the facility do not have leachate collection, a potential concern for the future if not addressed.

“Samples collected from the leachate pond on Dec. 21, 2021 were highly toxic and would constitute a pollutant if released to the environment," the report reads.

Even with the multiple infractions found by the ministry, Ocejo maintains that original concerns raised by the USIB were false, and "they've been proven to be false."

A follow-up inspection will be completed to ensure corrective measures are taken at the facility and further assess compliance with the requirements in the Organic Matter Recycling Regulation.

“Some corrective measures have been taken regarding the storage and covering of materials on site. This will be assessed during the next inspection,” the Ministry said.

"The Upper Similkameen Indian Band will remain engaged throughout the compliance assessment process ... the protection of the environment and human health remains a top priority.”

On the USIB's part, Irwin emphasized how this situation only showcases the importance of the BC government properly working with band to support community-based monitoring of these industrial operations.

"It benefits us all. The compliance inspection report has cleared up any confusion on whether Net Zero Waste Eastgate is operating within the provincial regulations or not. It is clearly stated in the inspection report that [they] are out of compliance on 12 of the 19 regulatory requirements and with five still not determined," she said.

"We look forward to action from the operator and follow up visits and potential actions from Ministry of Environment and USIB intends to participate throughout the process." 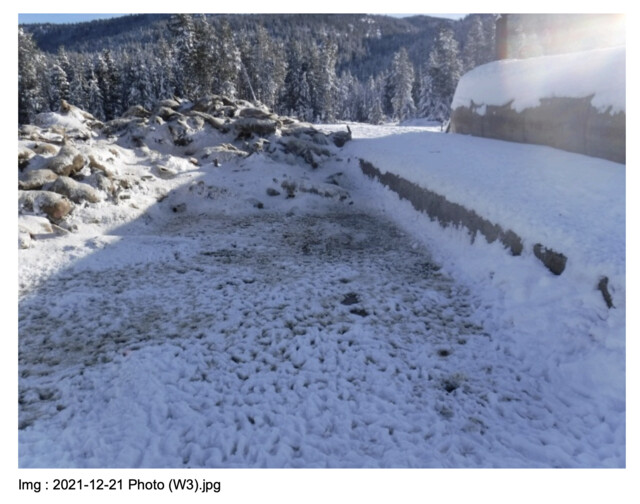 Photo: Ministry of Environment
Photo from the Ministry report showing, "Pig carcasses and liquid in concrete bunker" on Dec. 21, 2021