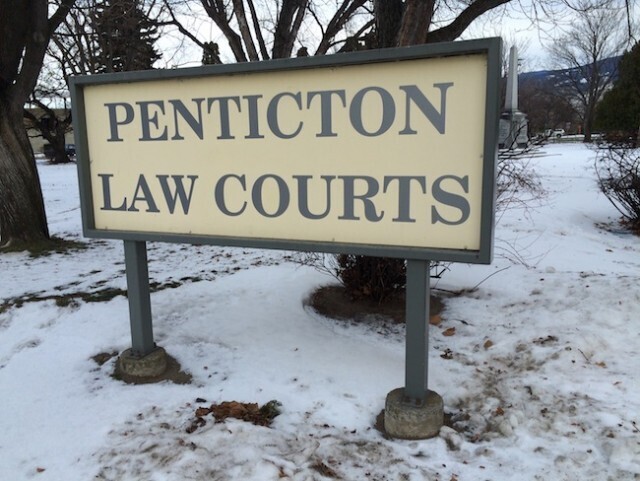 A South Okanagan man with a long history of property crime, weapons charges and breaches of probation will spend no more time in jail for his latest assault charge.

Aaron Ceretti, 36, appeared in Penticton court Friday to learn his sentence for a bear spray assault in October 2021. He was co-accused with his longtime partner-in-crime Mika Grgich, who is due in court Feb. 4.

Court heard that on Oct. 21, RCMP were called to an alley off Government Street in Penticton, where a resident had engaged with Ceretti and Grgich because he thought they were selling drugs.

The man, who lives across the lane from 144 Government Street and who described that location as being known for drug transactions, told officers he saw Ceretti and Grgich engaging in what he interpreted as a drug deal.

He confronted the pair, telling them to "get lost" and stop dealing drugs in the neighbourhood, and the matter got heated. In a statement of facts agreed upon by both Crown and defence, court heard that Ceretti took issue to the neighbour yelling at the pair and trading insults with Grgich, who was behind the wheel of a P.T. Cruiser.

Ceretti produced a black canister and sprayed the neighbour, who then fought Ceretti for control of the weapon which was later confirmed as bear spray.

The neighbour was able to grab the canister and subsequently sprayed both Ceretti and Grgich, who both fled the scene.

RCMP shortly caught up with both Ceretti and Grgich, who were arrested. Ceretti was out in the community on probation related to a spree of thefts, firearms and drug incidents in 2016, and he was found to have breached several of the rules.

He has a history of ignoring probation and bail orders, with 19 convictions for those offences alone. Ceretti also has two assault convictions, a firearms conviction, and various property-related incidents on his record, among others in his lengthy criminal history that spans throughout the South Okanagan, Similkameen and Interior.

Crown and defence made a joint submission Friday after Ceretti pleaded guilty to his October charges, equating to time served.

The judge agreed, and noted that Ceretti will still be under the probation order from March 2020, which expires in March 2023. The order includes standard drug, alcohol and weapons bans, no contact with victims of his crimes and mobility restrictions outside of British Columbia, as well as an 11 p.m. - 6 a.m. curfew.

Ceretti declined comment in court, and will be released Friday.