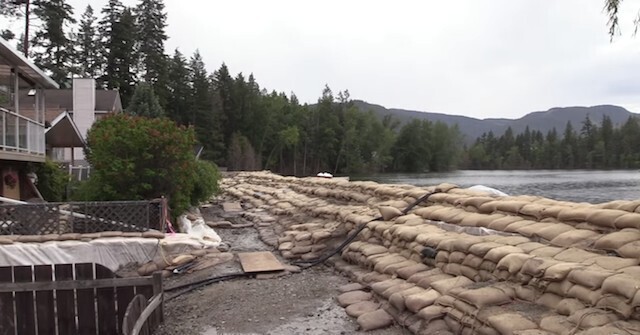 Photo: Contributed
A five-foot-high wall of sandbags holding back Lower Twin Lake from flooding in June 2018.

After years of asking for help from the Regional District of Okanagan-Similkameen to take over ownership of their water infrastructure, Twin Lakes residents were denied in their ask on Thursday.

The Lower Nipit Improvement District (LNID), which manages the water levels in the upper and lower lakes, offered to hand over the system to the RDOS in hopes the local government could obtain grants for desperately needed upgrades.

Information regarding the engineering assessment was presented to the board in October to discuss the acquisition, but questions arose regarding liability to the Regional District which prompted an additional detailed legal review, which was presented in December.

Ecora Engineering Ltd. completed an engineering and financial assessment to determine any infrastructure upgrades and operational procedures required to safely manage water levels in Twin Lakes and, subsequently, to consider the impacts of downstream identified in the Dobson/Pomeroy Twin Lakes and Park Rill Flood Mitigation Reports .

“There are a number of risks in the downstream Willowbrook and Park Rill areas to consider. Those studies indicate that any redress would be in the $10M - $15M range,” the report shared.

Even the recommendation of just fulfilling required updates to culverts to protect against flooding would cost $1.6 million, which RDOS staff estimated that translates to around $1,385 per year for each of 68 properties over 25 years with no grant funding.

Board directors still expressed concerns about taking over the system, pointing out that this issue falls to the provincial government capabilities with funding.

Apex and Kaleden area director Subrina Monteith was the voice petitioning for the board to takeover the system.

“I think that we need to figure out what we're doing, because this is not the solution. The solution is being collaborative as a region.”

Recent years of flooding, including an especially devastating 2018 in which many properties were damaged, have left the district's small board feeling inadequately prepared to maintain and protect the area.

“I completely sympathize with Director Monteith and I totally understand how the improvement district doesn't have the capacity. But I'm not convinced at all that we have the capacity either,” Doug Holmes, one of two RDOS directors for Summerland rebutted.

“We need to get the province involved in this because it's an issue that's bigger than all of us. If we just take this on then it's on us and the province washes his hands from it and that's probably exactly what they want. But I think the only way you get the help where we're all working together, which is what everybody wants is by turning this down and forcing the provinces hand that's the sad reality I see”

“Right now for us to take on the responsibility of another government with the service and without the funding and the provincial government ultimately responsible, why would we do that to our taxpayers?”

Karla Kozakevich, Naramata representative for the Regional District of Okanagan Similkameen, suggested LNID should dissolve in order to move forward with the getting their water issues addressed.

“If they're not able to manage what they are currently doing, they should dissolve. Then we'll see what happens if the province steps in and gets us engaged in the process.”

The recommendation from staff was to deny the takeover of the ownership, which passed by an 18-1 vote, with just Monteith opposed.

Photo: Contributed
A view of the LNID pump, looking towards the west side of the lake.