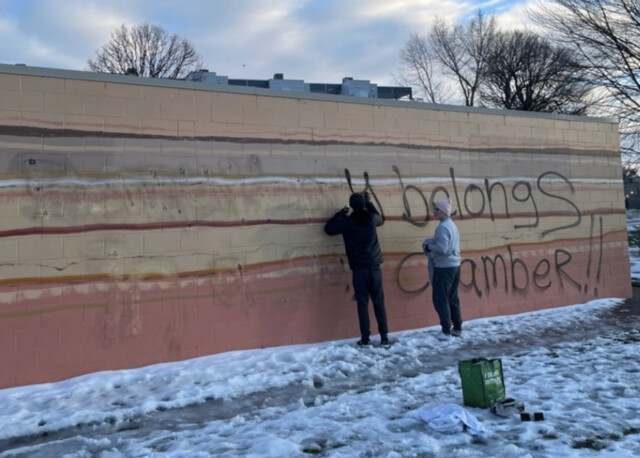 "Bonnie Henry belongs in a gas chamber!" and "The government is lying to you!!" were found spray-painted in feet-high black letters on the channel-floating business' two west-facing walls Thursday, starkly black against the terra-cotta colour scheme.

"We were incredibly surprised and very disappointed," said Diana Stirling, partner in Coyote Cruises with the Penticton Indian Band and K'ul Group.

Stirling said the team got to work immediately trying to remove it, but they could not paint over it effectively due in part to weather, and instead had to source products designed to scrub away graffiti.

"It just takes a tremendous amount of elbow grease. So we're slowly working our way through, trying to smudge it out," Stirling said.

"It's disgusting, and we're trying our best to get it removed as quickly as we can, but it's taking time for sure."

The graffiti is highly visible from the popular walkway across the river channel from Coyote Cruises, and Stirling said they have been hearing concerns. They ask for the community's patience while they work to remove it in a permanent way.

"The other thing that's so upsetting is that a local artist painted our buildings here. And it takes great care. It's not, you know, one coat of paint, this is an artist's work on our buildings. To do that [graffiti] with such a horrific statement is absolutely disheartening," Stirling said.

Staff members have been scrubbing away and will continue to do so. They have mostly smudged out the statement regarding Henry as of Friday afternoon, and will begin work on the other wall Saturday.

All of the graffiti removal costs come out of the business' pocket. The artist who originally painted the buildings will be back in the spring for final restoration.

Stirling hopes the community knows they are doing all they can to remove the disturbing messages.

"We're doing it as soon as we possibly can. I appreciate the patience," Stirling said.

"A lot of people walk by. A lot of people have contacted us to make sure that we were aware of it, and to express how upsetting the messaging was to them as well. And we understand that for sure." 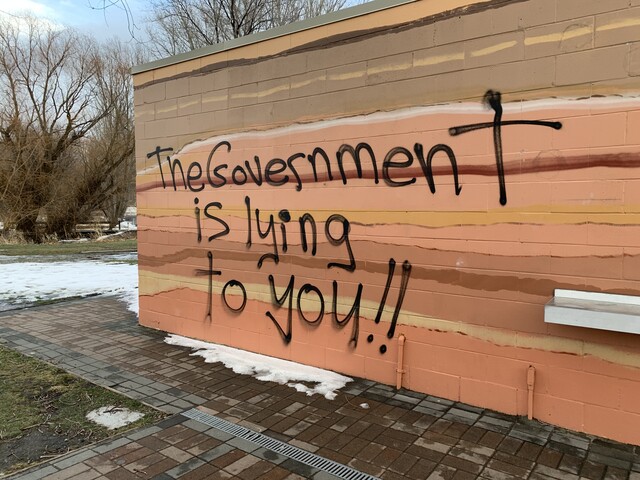 Photo: Chelsea Powrie
A second defaced wall has yet to be scraped away at Coyote Cruises Friday.