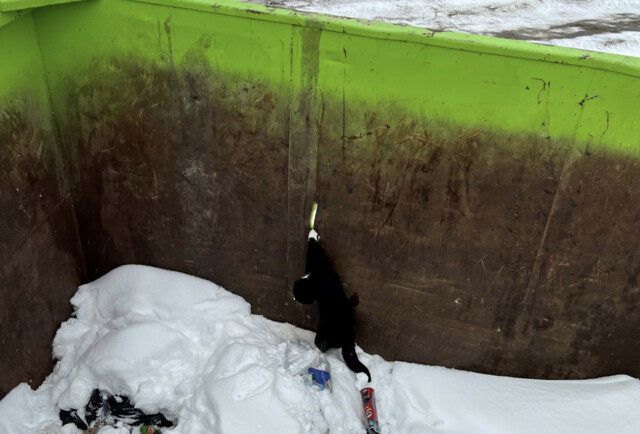 A Penticton-based cat rescue received a call from a local landfill about a cat that had become stuck in a jagged piece of metal inside one of their dumpster bins on Sunday.

Theresa Nolet with AlleyCats Alliance explained that sadly, this is not an uncommon occurrence for the rescue.

“In the past, we've had kittens that were found in a dumpster. Now with kittens, you never know if the mother cat has put them in there, because she's moving them somewhere and thinks that that's a great place for them to live. But there's always the fear that it has actually been someone that has physically just gotten rid of them,” she explained.

The three year old male cat found, which the rescue has named Terry, has not been confirmed yet as to whether he is a feral cat or previously owned by someone.

“We are hoping that he has belonged to someone at some point in his life so that he can become a house cat again.”

Terry was originally found by the landfill staff who managed to release him from the side of the dumpster, where his paw was caught.

“They had a very injured cat that they didn't know quite what to do with because they didn't want to just let him go. Apparently they get a lot of cats that go into dumpsters, of course because they're looking for food and they just get them out and set them on their way. But they did not want to do that with this poor guy because he was obviously injured.”

Two volunteers headed out and successfully caught Terry, who was then transported to a veterinarian for care.

X-rays revealed that no bones were broken, but his leg is severely infected and has soft tissue damage indicating that he had been there standing and stuck for at least 24 hours inside the bin. Terry is now on antibiotics, pain medication, and anti-inflammatories.

Terry is currently resting up in a foster home and will be looked after by AlleyCats Alliance. For now, the organization is in need of funding to help with their vet bills and animal care.

“Many people think that the vets work for us for free and they do not. Most of the vets in the valley are good with helping us by giving discounts, etc. But they are business and we don't expect them to do this for free, they couldn't afford that,” Nolet added. “We know he's got a long way to go.”

Nolet encourages everyone to spay and neuter their cats as the main solution to helping out animals in the area.

“What AlleyCats Alliance is really dedicated to is trying to stop the formation of these colonies where these cats get into trouble and their lives are not happy. They're out living free but many of the cats that we trap and take in have serious health conditions.”

“It's a very unhappy and sad life for those of us who are on the frontlines actually dealing with it.”

To donate towards Terry’s veterinary costs or to support the good work that AlleyCATS Alliance does in the Okanagan, head to their website using PayPal, www.alleycatsalliance.org, or by mail at 332, 113-437 Martin Street, Penticton, B.C. V2A 5L1