Highway 3 reopens after 16 hour closure due to crash 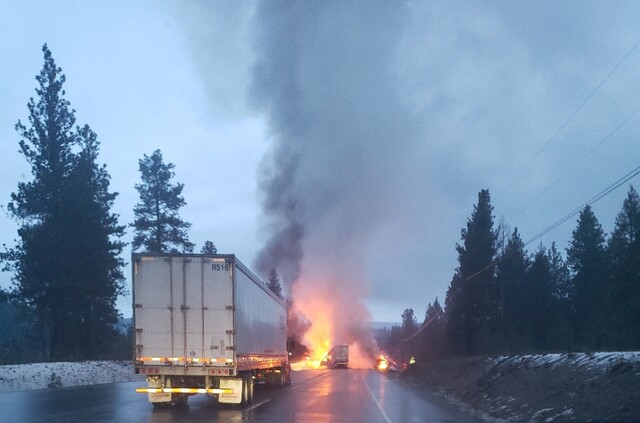 Highway 3 has now reopened after a closure of 16 hours.

DriveBC reports there is still an eastbound lane closure in the crash site west of Princeton.

Motorists should expect delays while the backlog clears.

Highway 3 will remain closed well into the evening.

DriveBC will provide their next update at 11:30 p.m.

The crash, which sent one person to hospital, occurred about four kilometres south of Princeton.

RCMP say at least one individual was taken to hospital as a result of the accident.

Police received a call shortly after 7 a.m. regarding two freight trucks on fire about four kilometres south of Princeton.

The next update is scheduled for 6 p.m.

Details are still limited, but RCMP say at least one person was taken to hospital after the crash.

The call came into police for two freight trucks on fire about four kilometres south of Princeton shortly after 7 a.m.

DriveBC reports the highway is still closed. The next update is due at 4 p.m.

Highway 3 remains closed between Hope and Princeton due to the crash.

DriveBC reports the next update is due at 3 p.m.

A photo from the scene of a vehicle incident just outside of Princeton shows a semi-trailer partially in the ditch and engulfed in flames while another vehicle in the other ditch is also completely engulfed by fire.

DriveBC is reporting that the highway is closed in both directions between Hope and Princeton due to multiple vehicle incidents, there is no estimated opening time or detour available.

An incident said to involve a semi truck on fire has closed Highway 3 west of Princeton.

DriveBC reports the highway is closed in both directions between Burr Road and Wrights Road, five kilometres west of the Similkameen community.

No estimated time of reopening is available.

There is also no detour.

Meanwhile, a second incident is reported 47 km west of Princeton at Tower Road.

It has also closed the highway.

At this time, it's unclear which incident involves the semi.

The Hope-Princeton Highway has been hit hard in recent day, and further west major delays continue at the site of a mudslide between Sunshine Valley and the Allison Pass Summit.

The route is open for essential travel only, with one lane each direction and areas of single-lane, alternating traffic.