Look out for scary plants 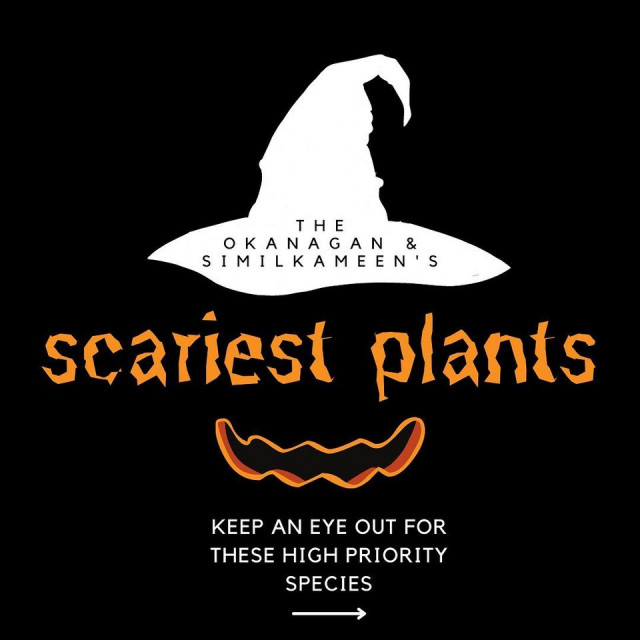 The top plants this fall season to look for are Rush Skeletonweed, Giant Hogweed and Yellow Starthistle.

"These species are all high priority invasive plants, meaning they pose a significant threat to our local region," OASISS shared to Facebook.

Skeletonweed is an invasive plants already spotted throughout the North Okanagan and has been creeping its was south. The plant has leaves at the base that resemble dandelions and are hairless with deep, irregular teeth that point back toward the leaf base.

“It's also known as naked weed or devils grass, and this is because of the nature of how it grows. It really does look very skeletal, there's no obvious leaves to it, it can get really tall, up to about four feet. But the greatest concern is the root which can go up to two and a half meters deep,” Lisa Scott, executive director for OASISS previously told Castanet.

The leaves higher up on the plant are small, giving the plant a ‘skeleton-like’ appearance and small yellow flowers occur at the ends of stems when in bloom.

As an invasive plant, it can easily take over grasslands and fields, decimating range land resources as well as crop areas.

Giant Hogweed has not been spotted yet in the area, but it occurs in the Lower Mainland, Fraser Valley, Gulf islands, and central to southern Vancouver Island. A small infestation has also been found in the central Kootenays.

The plants are extremely tall, reaching heights of up to five metres at maturity. Numerous small white flowers clustered in a large umbrella-shaped head, which bloom in mid August.

The most disturbing feature of giant hogweed is that it is a highly aggressive toxic plant. In it's steam and leaves, the plant has a clear, highly toxic sap. When in contact with the skin, this sap can cause a hypersensitivity to sunlight resulting in burns, blisters and scarring.

According to OASISS, the sap is so toxic that WorkSafe BC issued a “toxic plant warning” that requires workers to wear heavy, water-resistant gloves and water-resistant coveralls that completely covers skin while handling giant hogweed.

Yellow Starthistle is another invasive species without any reported sighting in the area, but the plant can reduce forages for livestock and cause neurological disease in horses, called “chewing disease” that can lead to permanent brain damage and even death.

The plant is a tap-rooted winter annual that can grow over one-metre tall. It can be distinguished by its pineapple shaped flower heads that have long, yellow spines and bright yellow flowers, grayish-green stems are winged and covered with fine hairs.

It can often be confused with its look-a-like, the blazing-star (Mentzelia laevicaulis), a native species that occurs on dry slopes in south-central BC. But the blazing-star has five bright yellow petals and the yellow filament stalks of the stamen have become widened and enlarged into petal-like structures.

Reports any invasive species sightings to OASISS at [email protected] or online at www.oiso.ca/report-species