One man shot in Naramata in believed-targeted incident

One man shot, in hospital 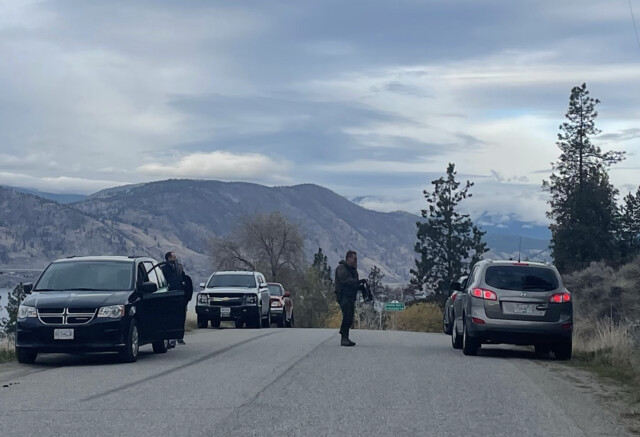 Police have confirmed one man was shot on Indian Rock Road north of Naramata Tuesday morning.

RCMP responded to reports of shots fired at 7:30 a.m. and found a 36-year-old man outside of a residence, who was conscious and asking for help and suffering from a gun shot wound.

BC Ambulance took the man, who police say is known to them, to an area hospital. His wounds are not life-threatening.

A nearby vehicle fire on Gammon Road at Gawne Road is currently being investigated as possibly related. The vehicle went up in flames in around the same timeframe as the shooting.

“Investigators are actively gathering evidence, and can confirm this appears to be a targeted shooting, and directly related to the drug subculture,” explains Constable James Grandy.

“Our officers were on scene within minutes and able to determine this was an isolated, targeted incident and not a random shooting. We want to assure the community there’s no evidence of ongoing risk, and to continue to report any suspicious person or vehicle to our detachment."

Police say they will not be releasing any further information at this time.

Anyone with information or video surveillance which may be related to this incident and have not yet spoken with police are asked to please contact the Penticton detachment 250-492-4300.

An Indian Rock Road resident said tensions are high in the tiny neighbourhood today, after sudden and intense police presence swarmed the area.

Kristina* told Castanet her husband was walking their dogs before 8 a.m. Tuesday morning and noticed one police car. The policeman told him to keep the dogs on a leash, and to go home and stay in.

Before long, many more unmarked police cars had arrived, and a helicopter began circling overhead.

“They were fully kitted up with the vests and everything and the canine unit was here,” Kristina said.

She said unfortunately, the police attention in the area feels familiar, after a year marked by violent death.

Two Kamloops brothers were found murdered in a remote area north of Naramata in May, in what police suspect was a gang-related killing.

The mother of a man charged in those murders was then found killed in her Naramata home in June.

“I mean, honestly, it almost seems like, 'Again? Are you serious?'” Kristina said, referring to the heavy police presence in the area.

Police have not released further information about the nature of their presence on Indian Rock Road Tuesday morning.

But Kristina said the string of murders naturally comes to mind to her and to neighbours she has spoken to, especially since one man facing charges connected to the Kamloops brothers’ deaths is still at large.

Whether or not today's events are related, which she hopes they aren't, it's still the first thing she thought of when the police helicopter started circling.

Police were also on scene Tuesday morning at a car fire on Gammon Road, which is south of Naramata.

Reporter Casey Richardson is on scene at Indian Rock Road where police have blocked the way through right where the road splits from Naramata Road North.

Richardson said there were also cops stationed at the entrance to Naramata Village further south, though the road was not blocked.

She also sees a police helicopter circling the neighbourhood beyond the blockade.

Police on scene were unable to provide official comment, but said they expected they will be able to share more later.

In another Naramata incident Tuesday morning, a car went up in flames on Gammon Road near Gawne Road.

Fire crews responded shortly before 9 a.m. and residents witnessed the vehicle in flames.

Castanet has reached out to the fire department for more information and will update. There has been no confirmation from authorities at this time that the vehicle fire was related to the police response. 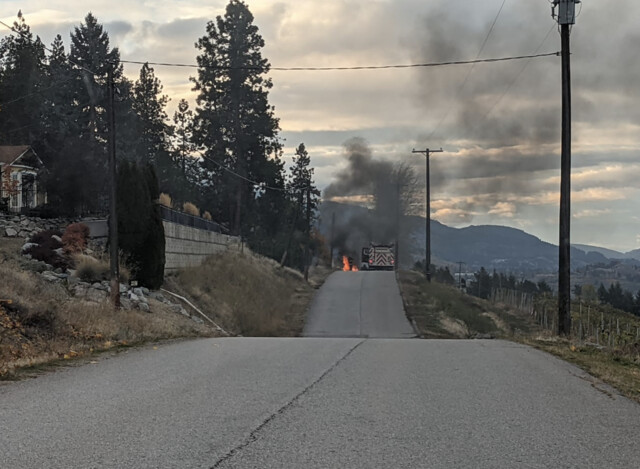 Photo: Contributed
A vehcle in flames on Gammon Road in Naramata before 9 a.m. Tuesday.

Police are responding in large numbers to the Indian Rock Road area of Naramata outside Penticton Tuesday morning.

Penticton RCMP Supt. Brian Hunter said at 7:43 a.m., police responded to a report of shots being fired in the area.

"There is a heavy police presence in the area with road blocks set up. Please call the Penticton RCMP @ 250-492-4300 or 911 if you observe anything suspicious in the area," Hunter said in a brief preliminary news release to media.

Multiple social media accounts from residents describe police telling them to stay in their houses.

Castanet will have more to come.