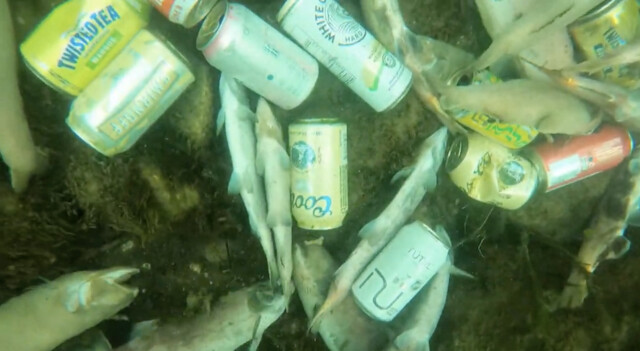 A team of divers took to the Okanagan River channel in Penticton to try and find some lost items and instead came across mounds of trash and empty cans.

Lake Country's Mind Over Matter Diving and friends posted the video on Oct. 15 of their dive from the north to the south ends of the channel.

“This is by far the worst trash site we have dove this year,” the video's description reads.

"Due to the high population in this river during the summer months people just throw their cans and trash in the water and don't think anything of it but this bad!"

The crew has documented several videos on their YouTube channel of previous cleanup efforts around the B.C. Interior.

"Our main goal is to keep waterways clean," Ajay Weintz of Mind Over Matter Diving previously told Castanet, along with bringing the issue of marine pollution to the public's attention.

Last year, over 60 volunteers gathered to clean up the Okanagan River channel in October, filling up an entire truck with garbage after the north end and mid-section of the channel had been cleaned.

In this latest video, images of dead fish are intermingled with garbage. It is spawning season for salmon, so some dead fish are to be expected.

Watch the video below to see the underwater view of the channel.