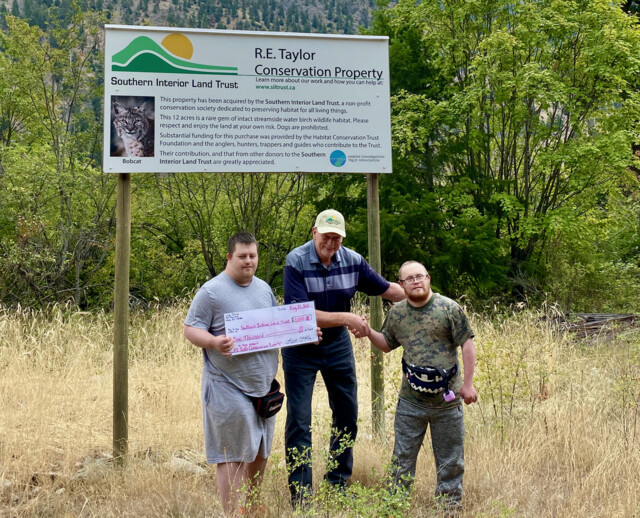 When their sister passed away, two Olalla brothers decided to honour her memory by doing something to give back to community organizations she would have loved.

Josh and Jayk Low lost their sister in December 2020. Their mother Merry Low said the brothers, 25 and 29, have Down syndrome, and have always loved doing community service.

This time, it was personal.

"They wanted to do a fundraiser for something that their sister would have liked," Low explained.

They started collecting recyclables from the community, which Low said was a great way for the pair to get out and meet people as newcomers to the rural area.

They returned the cans and bottles collected, and donated the profit.

"The first fundraiser they did was Okanagan Horse Sense, because it was a horse program and their sister loved horses, and then they just decided to carry on and pick a different charity every month," Low said.

In the months to follow, they supported the local food bank, local school lunch program, and the Southern Interior Land Trust, among other causes. As the boys picked up steam, they were able to start making on average around $400 a month.

Then, a man's house burned down in Olalla, and Josh and Jayk decided that was their next donation recipient. When Al Peatt with the Southern Interior Land Trust heard that, he called to donate back the hundreds SILT had received to go toward that cause instead.

"And so then the boys decided because SILT had been so generous, that they would do two months for SILT," Low said.

They proudly presented SILT with a cheque for $1,000 this weekend. SILT will use the donation to help manage wildlife habitat at its R.E. Taylor Conservation Property in Olalla, one of many they manage.

“The boys’ community spirit and leadership is truly outstanding. SILT appreciates their support and that of everyone who donated their bottles and cans.”

Peatt said other funding support for the conservation property has come from the Toronto Dominion Friends of the Environment fund, but more support from anyone who wants to join Josh and Jayk with a donation large or small is always appreciated. Find out more about SILT and how to get involved here.

As for Josh and Jayk, they are continuing their quest to honour causes dear to their sister and have become something of a fixture in the community.

"They've got a good following of people that donate their stuff to them," Low said.