Another evacuation alert has been issued by the Regional District of Okanagan-Similkameen in Electoral Area C and the Town of Oliver for lands within the boundary of the town.

BC Wildfire Service (BCWS), the RDOS and the Town of Oliver are actively assessing the situation and should conditions deteriorate, Evacuation Orders may be issued.

More properties are being evacuated north of Osoyoos late Monday night due to a fast-moving wildfire burning in the area.

According to the RDOS, evacuees are being encouraged to stay with friends or family.

“Due to a shortage of hotel accommodations, please consider making arrangements to stay with family or friends if possible,” read the bulletin announcing the order.

“Take pets with you if you can.”

The RDOS has declared a state of local emergency in the area due to the Inkaneep Creek fire, burning about six kilometres north of Osoyoos. 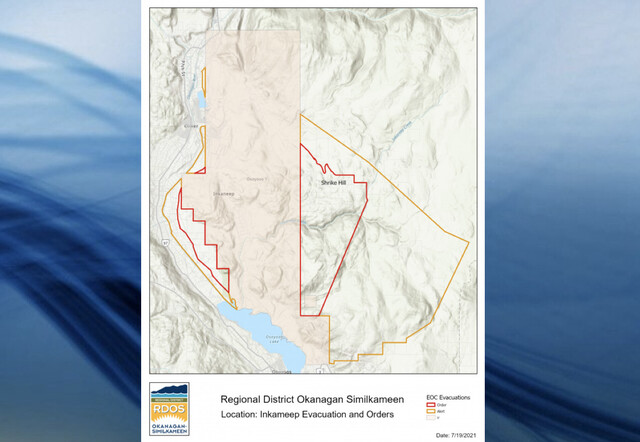 Photo: RDOS
The RDOS issued an evacuation order for a number of properties north of Osoyoos at 10:30 p.m. on Monday.

The Osoyoos Indian Band has issued an evacuation order for roughly 200 properties in the Inkaneep area.

The order has been issued due to an ''immediate danger to life and saftey."

The Osoyoos Indian Band has also issued an evacuation alert for over a dozen other homes in the area.

The Town of Oliver has activated its Emergency Operations Centre.

In a tweet The Town said it is working with the Regional District of Okanagan-Similkameen and Emergency Management BC.

A Reception Centre to support evacuees has been established at the Oliver Legion 6417 Main Street.

BC Wildfire Service has more than doubled its estimate of the size of the Inkaneep Creek wildfire.

Placed at 300 hectares for much of Monday afternoon and evening, it is now estimated at 700 hectares.

The Regional District of Okanagan Similkameen is expected to issue evacuation alerts and orders shortly.

The Regional District of Okanagan Similkameen says evacuation alerts and orders are pending in the area of the rapidly growing Inkaneep Creek wildfire six kilometres north of Osoyoos.

Local Search and Rescue and RCMP are assisting with conducting tactical evaluation for properties in immediate risk.

Castanet will have updates, as will the RDOS Emergency Management service here.

Oliver Mayor Martin Johansen says he has declared a local state of emergency for the Town.

But it is unclear what properties may be under evacuation alert or order, or neither, due to the Inkaneep Creek wildfire that sparked around 4 p.m. Monday afternoon.

"We have signed a declaration of emergency, just to make sure that we're all our ducks are in a row at this point in time. And right now I'm just watching the smoke and waiting for more clarification on the orders that are being put together," Johansen said.

He said he does not have a list of addresses, but did say that the Town has mobilized Emergency Support Services, but is looking at a new location for a headquarters as the community centre where they usually set up camp is likely to be under evacuation alert.

Johansen said everything is happening very quickly, and he will provide more updates when possible.

The Regional District of Okanagan Similkameen has also promised updates Monday evening as soon as possible.

BC Wildfire is calling the Inkaneep Creek fire "aggressive" and reports strong winds are contributing to growth.

BC Wildfire personnel and aircraft are on scene. They have estimated it at 300 hectares in size, and smoke and ash are impacting nearby communities.

"The fire is currently an extremely vigorous surface and active crown fire," reads an update from BCWS.

The Regional District of Okanagan Similkameen is looking into potential evacuation alerts and orders for the area around the Inkaneep Creek wildfire.

BC Wildfire Service has estimated it at 300 hectares as of its latest update.

The RDOS expects to have a formal update on evacuations very soon. Castanet will have that update as soon as possible.

Castanet reporter Casey Richardson is live with a look at the now-named Inkaneep Creek wildfire.

Power is out in parts of Osoyoos and Oliver near the Black Sage wildfire.

Over 3,000 Fortis BC customers are affected.

They will restore power once the fire department deems it safe. 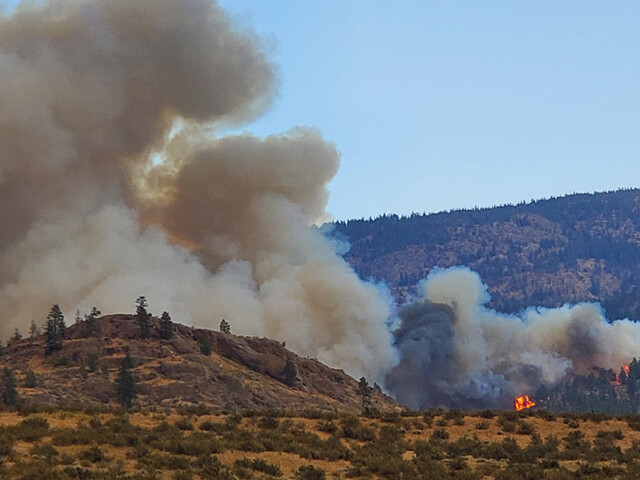 Debbie McKay and her husband were heading to Oliver from their home in Vintners on the Creek RV Park Monday afternoon just north of Osoyoos when they saw a sight just over the hill to the east that stopped their hearts.

"We saw the billows of smoke coming up, thick, black smoke, and then we saw flames. So we turned around and came back, and it just seemed to get bigger and bigger and bigger," McKay recounted.

The Black Sage wildfire sparked suddenly and aggressively shortly after 4 p.m. Monday. BC Wildfire, local fire departments and RCMP are responding, with no word yet on whether structures have been impacted, although some photos show thick, dark smoke often indicative of man-made materials being burned.

McKay said for their part, they have been packed up and ready to go for weeks.

"We've had our camper packed up and ready just in case we need to go with all the wildfires happening, but we are concerned about everybody else and trying to do what we can to help here. It could spark up again at any minute. So we're going to be on watch most of the evening, but kudos to how fast the response to the fire was by our firefighters and all those assisting them," McKay said.

She said air attacks on the fire have been near constant since it began. She and her husband are urging nearby residents to pack up, and are happy to help if anyone needs it.

Anyone living in the Vintners on the Creek area is welcome to contact McKay, who is also an emergency first responder, for help getting ready to leave if need be by reaching out to her here.

Others in the area and surrounding communities have reported to Castanet that it is raining ash.

The sky has gone so dark that motorists have to use their headlights.

Castanet's Casey Richardson will be on scene to provide a live update. 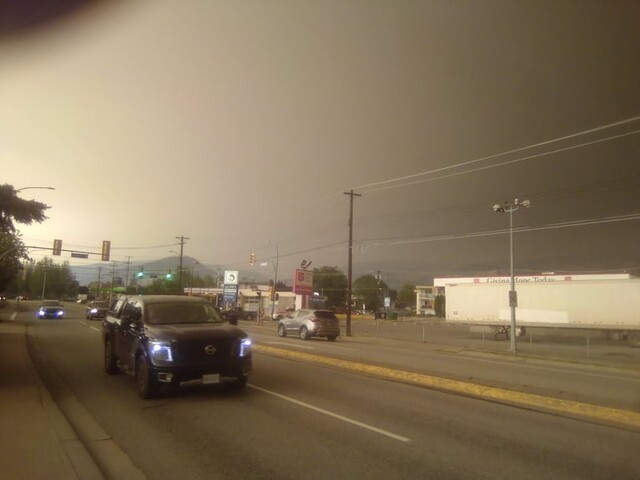 A new wildfire has sparked between Oliver and Osoyoos, reportedly just north of the Osoyoos Cottages area.

BC Wildfire Service confirmed they are responding to the blaze which has grown quickly to at least three hectares and is putting up a lot of visible smoke. It has been titled the Black Sage Road wildfire.

It is classified as out of control. Local fire crews and RCMP are on scene and BCWS aircraft and firefighters are en route.

BCWS was unable to provide details at this time as to whether the fire is threatening any structures.

The Oliver Fire Department is reporting a large fire on Inkameep Road.

Crews are on scene attending. They say further updates will come.

They are asking people to stay clear of the area.

Social media users are reporting heavy smoke in the area. It is highly visible from Osoyoos and Oliver. 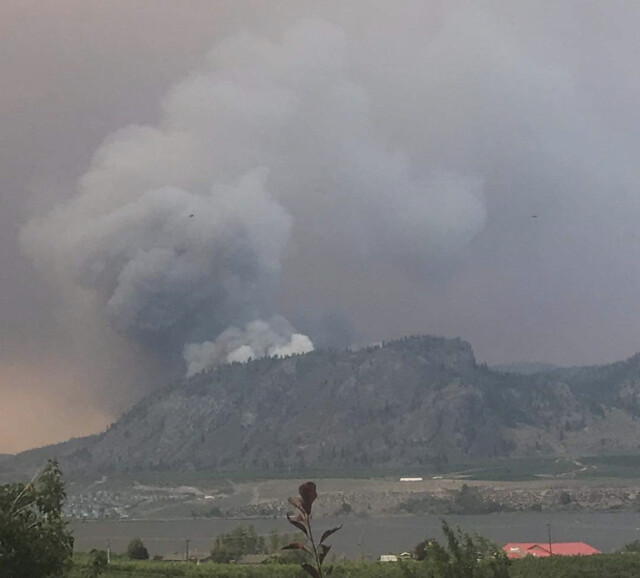