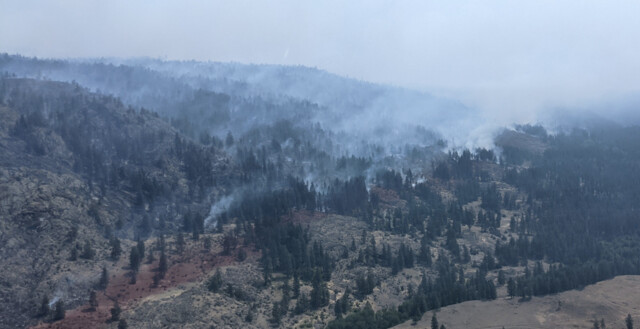 The Thomas Creek Wildfire now stands at 900 hectares, according to BC Wildfire Service. The fire still remains out of control.

Heavy smoke throughout Monday hindered efforts in trying to properly estimate the size of the fire. The size increase is attributed to more accurate mapping as visibility increased in the area.

The fire sparked on Sunday east of Skaha Lake near Okanagan Falls.

Heavy equipment is working in the southwest corner and continuing upslope with their objectives, according to BCWS.

The cause of this fire is still under investigation.

BCWS had 33 personnel responding to the incident on Monday, with assistance from three helicopters, eight pieces of heavy equipment, Structure Protection Units and the local Fire Department. Crews will remain on site overnight.

Updates on this fire will resume at 7 a.m.

The Regional District of Okanagan-Similkameen has rescinded the 77 properties that were put on evacuation order Sunday.

The 77 properties are now on evacuation alert in addition to the 627 properties that were put on alert since Sunday afternoon.

"An Evacuation Alert has been issued to prepare you to evacuate your premises or property should an Evacuation Order be issued," the RDOS said in a statement.

Property owners will be given as much advance notice as possible prior to an Evacuation Order, however you may receive limited notice due to changing conditions.

BC Wildfire Service and the RDOS EOC are actively assessing the situation and should conditions deteriorate, Evacuation Orders may be issued for affected residents.

"Of the 77 properties that were initially on evacuation order a total of 18 registered for emergency support services," said RDOS communications coordinator Erick Thompson.

Thompson says it is important anyone on alert or order registers with ESS.

"It's important that residents are put in the system so that if an alert changes to an order ESS can make sure everyone is safe."

"We are asking people to plan ahead of time because you will likely get asked to leave with very short notice. It is best to plan your accommodations ahead of time. Hotels have a limited capacity," Thompson added.

Gord Cullen says he found out he was on evacuation alert Monday morning after returning from a camping trip.

“I came down the 200 and a lot of vehicles were parked taking a look at the big tankers putting the chemical spray down. And then I sat down on the beach and watched all the planes go around and blast it with water."

Cullen is just one of 627 properties on evacuation alert as of Monday afternoon.

A total of 77 properties are on evacuation order.

“My mom is coming up from my sister's place in Summerland to pick up all of her important papers that we have at the house and I have my car pretty much packed up with all the stuff I want if I have to go," Cullen added.

A total of 33 firefighters, three helicopters, and eight pieces of heavy equipment are actioning the blaze.

The Thomas Creek Wildfire remains at 500 hectares in size and is classified as out of control.

Many of those under evacuation order in Okanagan Falls are standing by their properties and animals, defying the order and staying in place as the Thomas Creek wildfire rages nearby.

Fewer than 10 people from the 77 properties under evacuation order have registered at the emergency reception centre, and also fewer than 10 of the 627 properties on evacuation alert. The RDOS continues to urge those under order or alert to register, just in case.

Good news from the wildfire includes the fact that it is growing in a southeasterly direction, away from homes and infrastructure.

"We've got three helicopters that are bucketing and cooling need the perimeter, as they establish their containment lines. So that's going to be continuing throughout the day, it's probably gonna take us a couple of days to get that containment line on the east side, based on fire activity and also workable ground," said BC Wildfire representative Kim Janowski Monday afternoon.

He added that terrain is difficult, and that he hopes civilians will say clear of the fire area.

The Thomas Creek wildfire is still listed at 500 hectares, but that number could change when smoke clears and crews are able to get more accurate mapping.

In the meantime, authorities are urging caution and readiness from nearby residents. For those with livestock, Animal Emergency Lifeline Response Team and the Ministry of Agriculture are involved with evacuations. RDOS CAO Bill Newell said an estimated 30 cows and 20 horses are in the evacuation order area.

Fire crews including Janowski are determining Monday afternoon whether conditions are safe enough for evacuation orders and alerts to be downgraded.

For now, 77 properties remain on evacuation order and 627 are on alert.

"We want people to understand that we're going to give you 30 minutes, and if we tell you you have to leave, then it's for your own safety," Janowski said.

Castanet's Madison Erhardt is live on scene with the latest on the Thomas Creek wildfire.

The RDOS is providing an additional update on the Thomas Creek wildfire.

Watch the live stream above.

The Thomas Creek wildfire is still listed at 500 hectares, as of a BC Wildfire Service update Monday morning.

The Regional District of Okanagan Similkameen is expected to provide another update on the many evacuation orders and alerts at noon Monday. 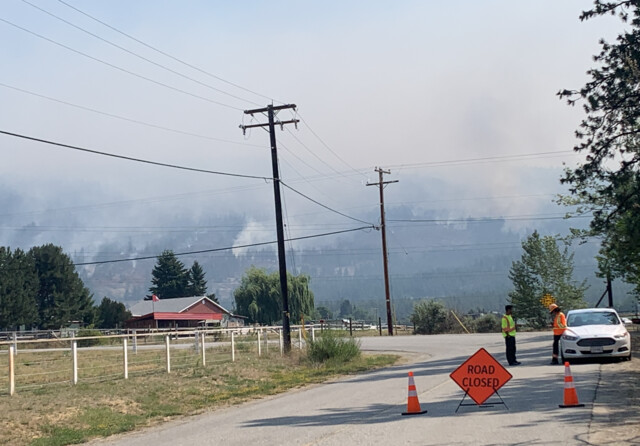 The RDOS says heavy smoke in the area is making it hard for BC Wildfire crews to get an update on the size and scope of the Thomas Creek wildfire, but they are expecting an update later Monday.

Seventy-seven properties, 67 of which have civic addresses, remain on evacuation order, and a further 647 properties are on alert.

CAO Bill Newell urged residents on alert or order to register with Emergency Support Services, and to check in with their insurance company about fire coverage.

"And otherwise, please stay away from the area roads are closed. It's a hindrance to BC wildfire both for their aerial attack and the ground attack if they have to worry about civilians in the area. They do have perimeters set up around this. So, boats, cyclists vehicles stay away. Please don't fly a drone in the area," Newell said.

Communications director Erick Thompson added that the Emergency Operations Centre can be reached at 250-490-4225.

"If you see a fire approaching, absolutely do what you have to do to get out of that area and make the phone call," Thompson said.

The RDOS will be providing another update at noon.

Watch the Regional District of Okanagan Similkameen's live update on the Thomas Creek wildfire above, starting at 10 a.m.

A previously postponed Regional District of Okanagan Similkameen live video update on the Thomas Creek wildfire situation will now go ahead at 10 a.m.

The RDOS cited technical difficulties Sunday night when they called off the briefing.

Castanet will have the meeting live in this story at 10 a.m.

A further live update is planned for noon, at which media will be able to ask questions.

Castanet reporter Madison Erhardt is currently heading to Okanagan Falls to provide an updated look at the fire Monday morning.

Castanet is awaiting an update from BC Wildfire Service as to the size of the fire, and number of personnel on scene. 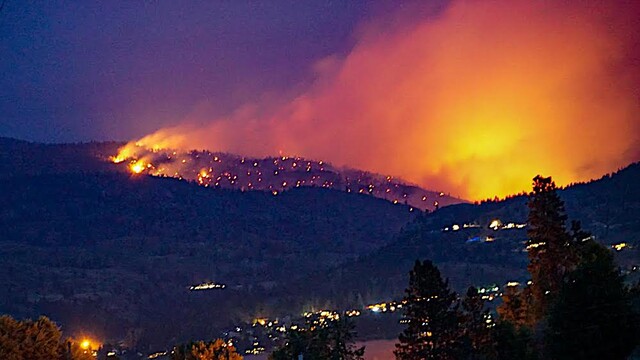 The Thomas Creek Wildfire near Okanagan Falls continues to burn out of control today after exploding to 500 hectares in size on Sunday.

Seventy-seven properties east of Okanagan Falls remain on evacuation, with a further 600 on alert.

The blaze prompted the Regional District of Okanagan Similkameen to declare a state of emergency, but technical difficulties halted a planned live briefing late Sunday.

Skimmer planes, two helicopters and eight ground crew, with multiple pieces of heavy equipment battled the blaze on Sunday, with work on the ground continuing overnight. The Okanagan Falls Volunteer Fire Department was also fighting the fire all night. 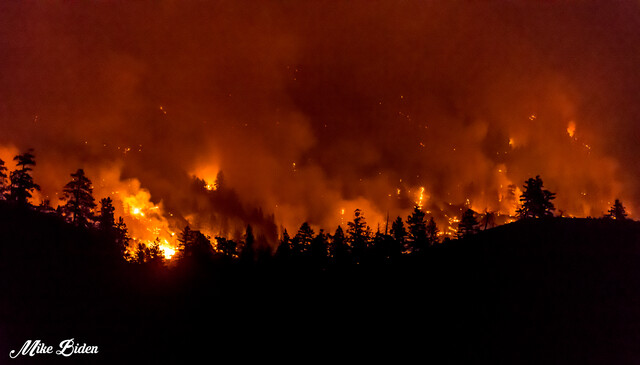