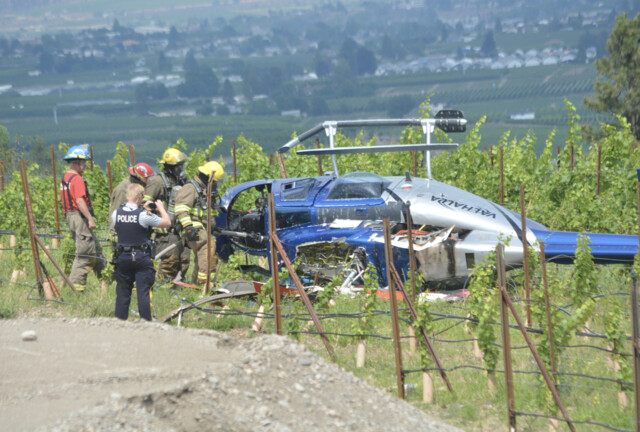 Oliver RCMP commander Sgt. Don Wrigglesworth said three people were transported to hospital by BC Ambulance after the helicopter crash Thursday afternoon in an Oliver vineyard.

He said the Transportation Safety Board of Canada is investigating, and that Oliver RCMP assisted on scene.

A helicopter crash-landed onto the grounds of an Oliver winery on Thursday afternoon, slowly leaking out fuels into the vineyard.

Times Chronicle newspaper editor Lyonel Doherty was on scene right away, and shared images with Castanet.

The Oliver Fire Department was called at about 2 p.m. to the "helicopter incident" at Checkmate Artisanal Winery on Wild Rose Street.

“We found a helicopter that had [crashed], we're not entirely sure what precipitated the crash, but we found a helicopter on its side and some smoke coming from the engine compartment which we doused with water,” Oliver Fire Department spokesperson Rob Graham said.

“We then disconnected the power which then in turn, stopped any fuel flow because it was pumping fuel out of it and into the vineyard.”

The pilot was out of the helicopter by the time fire crews arrived on scene.

“It looks like there was some construction going on there at the same time so some of the workers may have helped to extricate the pilot and get him indoors where he could receive some medical attention when BC Ambulance arrived.”

Graham added that there may have been three passengers inside the helicopter as well.

Valhalla Helicopters, the owner of the aircraft which operates out of West Kelowna, declined to comment when reached by phone by Castanet.

Castanet has also reached out to RCMP for further information on any potential investigations into the crash.

-with files from Chelsea Powrie