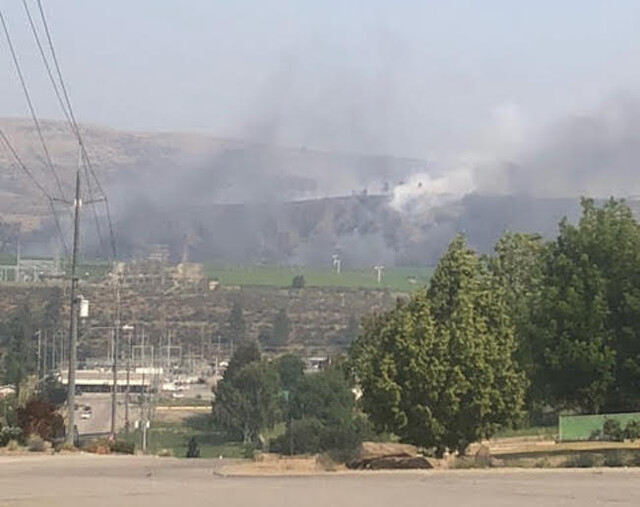 All evacuation alerts on Osoyoos Indian Band land have been rescinded by the Band.

Oliver Fire Department spokesperson Rob Graham said only one structure was damaged by the Wolfcub Creek wildfire, and none lost.

When they arrived on scene for first response to reports of a brush fire, they found smoke and flames in the area of houses.

"Our second unit responding were sent to a structure where flame was starting to actually burn the outside of the building," Graham explained.

"They were sent there for structural protection on that building. And then a few other units were sent out to provide protection to a few other structures that could have potentially been in harm's way had things progressed worse."

Luckily, fast work from OFD and BC Wildfire air bombers meant that no structures were lost. One has exterior damage and Graham suspects some smoke and water damage, but it is still standing.

Today, Graham imagines their team will be on standby if BC Wildfire needs more help with structure protection, but it looks likely things are under control.

BC Wildfire has good news from the scene of the Wolfcub Creek wildfire — the fire is now classified as being held, and is not expected to grow.

There are 10 personnel on scene Monday and air support is available as necessary.

"Suppression action has been sufficient and it is not likely to spread beyond existing boundaries," said Aydan Coray, fire information officer.

Coray added that at this time there are no structures threatened. Oliver fire crews responded to help BC Wildfire crews Sunday afternoon when the fire first sparked, in order to offer their expertise in structural protection tactics.

"That was great support for us there," Coray said.

The Osoyoos Indian Band, on whose land the fire is burning, issued a State of Local Emergency Sunday night and put over a dozen properties on evacuation alert.

The Regional District of Okanagan Similkameen has assisted the Osoyoos Indian Band in setting up an Emergency Operations Centre reception spot at the Oliver Recreation Centre, and the band has issued a local State of Emergency.

Over a dozen properties were issued an evacuation alert Sunday night.

The BC Wildfire Service website now lists the Wolfcub Creek fire at an estimated 45 hectares in size.

The blaze is believed to have been human caused.

As of Sunday night, the Oliver Fire Department and wildfire service crews had set up a perimeter guard around the fire.

Helicopters and air-tankers battled the blaze from above, and the Oliver Fire Department said in a Facebook post that fire activity may be active through the night and into this morning.

The public is reminded to avoid the area, about five kilometres northeast of the town.

“Structures are in the area but not immediately threatened,” BCWS said Sunday evening, however social media posts showed at least one structure burning in a cloud of black smoke.