Indigenous community member upset to see Catholic church in Hedley burned down, the second in the Similkameen region

A member of the Indigenous community was saddened when she spotted St. Ann's Catholic Church near Hedley burning on Saturday morning on her way to work.

“It’s very upsetting, that little church was like a landmark for Hedley. I remember explaining to people how they would get to Hedley. Saying “if you see the little white church on the hillside you’ll be entering Hedley,’” Rose Holmes said over messenger. Holmes is a member of the Indian Band in Vernon, but grew up in Hedley.

Her 31 years in that small town hold many special memories with the church.

“There have been many funerals and weddings at that church. The church was around 100 years old,” Holmes explained.

“So many memories from that church and [it] was taken away by vandalism. I am Indigenous, and this upsets me, because it does hurt our elders seeing these historic buildings being taken away.

“This isn’t justice for what’s happened to our people. This is stupidity by some individuals!”

Holmes added that her dad explained it was the oldest church in BC.

“Back in, I want to say 1998, I remember a movie being filmed at that church. I was eight years old and had to sit inside like I was attending church. Well, Jack Nicholson busted through the doors, the movie was called ‘The pledge’’.”

Police are calling the fires that destroyed two separate churches in the South Okanagan and Similkameen regions Saturday morning "suspicious."

Princeton RCMP received a call about the first fire at St. Ann's Catholic Church near Hedley at 3:52 a.m. The second fire, at the Chopaka Catholic Church west of Osoyoos, was reported to the Keremeos RCMP at 4:45 a.m.

Both churches were completely destroyed, and the Chopaka fire spread to nearby brush. BC Wildfire crews were able to quickly extinguish the spreading blaze though.

"The investigations into the previous fires and these two new fires are ongoing with no arrests or charges."

Police have asked anyone who may have information about the fires, or witnessed anyone or any vehicle near the churches Saturday morning, to call the Penticton RCMP Detachment at 250-492-4300. 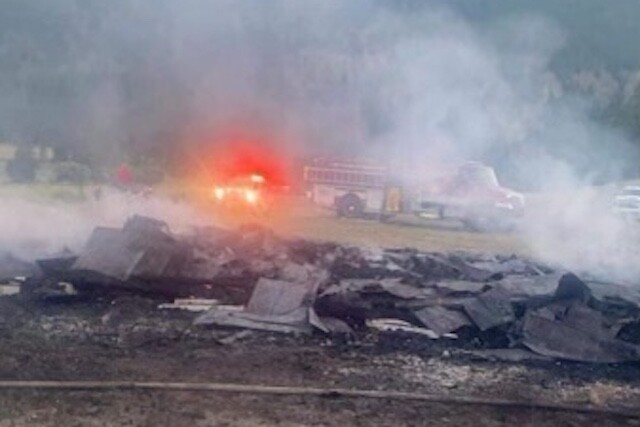 Photo: Gary Walters
The remains of one of the two churches burned Saturday morning.

Chief Keith Crow of the Lower Similkameen Indian Band was woken at 4 a.m. Saturday morning with the news that the Chopaka Church in the small community of Chopaka was ablaze.

Crow said he believes the church, located about a half hour west of Osoyoos, was built some time around 1896, but it's now been completely destroyed.

Around the same time, the St. Ann's Church near Hedley, on Upper Similkameen Indian Band land, was also destroyed by fire. That historic church was built around 1910.

Crow says the investigations into both fires are in their early stages, but the fires have already had an impact on his community.

"It's a big impact," he told Castanet. "We still have our Christian and Catholic followers, and they just had service a couple weeks ago at that church. They were very upset on Monday when the two churches were burnt in Osoyoos and Penticton. Now that these ones have burnt, it's devastating to them.”

Churches on Osoyoos Indian Band and Penticton Indian Band lands were destroyed by fire early Monday morning. Those fires have been deemed "suspicious."

“I really don't condone the actions of whoever's done this, but it is under investigation. We'll have to wait and see," Crow said.

The destruction of the churches come in the wake of the discoveries of a mass grave at the site of the Kamloops Indian Residential School, followed by another in Saskatchewan.

“I really encourage people to reach out to somebody. There's always phone lines open, there's always people to talk to. I've offered myself up to anyone if they need to chat and want to have a talk. I feel for all of them," Crow said.

"We're in for more hurt now. Look at what happened in Saskatchewan, Kamloops, and Williams Lake is doing their testing right now. When all the rest of the residential schools start doing testing, there's just going to be more and more pain that comes out; the 215 was just a start.”

Two more Catholic churches located on reserve land in the Similkameen region were burned to the ground early Saturday morning.

“It is with great sadness we inform all of you Saint Ann's Church was burned to the ground this morning,” the Upper Similkameen Indian Band posted to Facebook Saturday morning.

“The investigation has begun and we will report back to all of you while we try to heal as a community.”

Following those fires, Penticton Indian Band Chief Greg Gabriel said there is a deep anger and hurt amongst Indigenous people Canada-wide following the ongoing discoveries of unmarked children's graves at residential school sites, but he said he doesn't condone arson.