Penticton moving full steam ahead with an outdoor skating rink downtown, scheduled to open in December 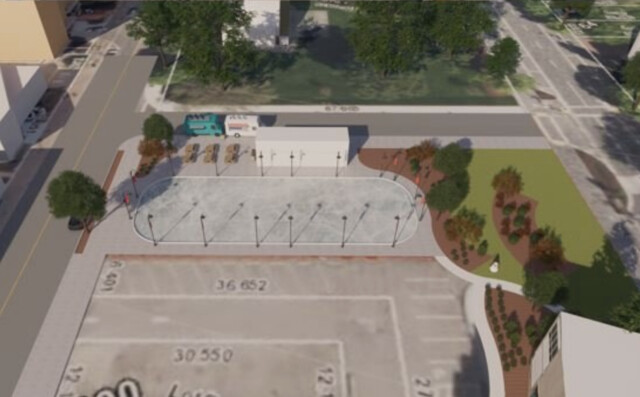 Photo: Activate Penticton
A rendering of the soon-to-arrive outdoor skating rink in Penticton.

Penticton, get ready to lace up your ice skates.

The project, the brain child of non-profit society Activate Penticton, was originally on the table for 2020, but COVID-19 delays pushed the timeline to 2021.

Drew Barnes with Activate Penticton shared details with council Tuesday, looking to get construction underway in August and have a grand opening in December 2021.

Barnes said they have been fundraising up a storm, and have two potential scenarios depending how much more comes in, a lower-cost plan at $440,000 and a higher-cost one at $1,045,000.

"We have funding in place [for the low option]," Barnes said.

"Two things that will happen in both options is the skating rink will be open this winter, it will be fully refrigerated, about 6,000 square feet, and that will be operational from December to February. We might be able to make that season a little bit longer, we'll see how the weather is."

In the higher cost option, a fully-electric Zamboni is included instead of a "bambini" towed by a quad, boards and glass for ice hockey will be included, off ice-rubber matted areas will be included so people can walk around in their skates and perhaps visit a nearby food truck, sitting areas and fire pits will be installed and a new asphalt parking lot south of the rink with improvements will be put in.

All that depends on fundraising, which Activate Penticton has more information about on their website.

Council will also potentially be contributing $125,000 to infrastructure improvements, but that may potentially be covered by an upcoming provincial grant. They had previously committed to moving $200,000 for a Gyro Bandshell washrooms upgrade be moved from 2022 to 2021 to be part of the rink, with plans for a heated year-round vandalism-resistant structure of eight stalls.

Council was visibly delighted to vote yes to support the rink and approve a use license between Activate Penticton and the city.

"I can't tell you how thrilled I am to finally have an outdoor skating rink that we can actually enjoy, and the most important part is that it's going to come during the shoulder season of the year where all those extra bodies are needed downtown to support our merchants and all the businesses that operate in that part of the city that's fairly quiet during the winter time," Mayor John Vassilaki said.

"I'd just like to add my congratulations to everyone involved, it's an outstanding initiative. One of my fondest childhood memories was skating down the Rideau Canal, and I've always wanted an outdoor rink," Coun. Katie Robinson said.

Coun. Regehr wondered whether there were any plans for community events to be held on the ice.

"Typically there's going to be blocks during the day after work, after school-type hours that would be open to public. And there will be times available to book for private events," Barnes explained.

"And then there will also be certain public events like around winter break. And then in the summer we will continue to manage it and we will be open for bookings or events. If the Farmers Market could find a use for it, bike valet, anything like that, we will come up with a schedule that will be posted at all times on our website, and open to adopting that as needed as we go through each month or a year."

The next step for Activate Penticton is to send parts of the project out to RFP with the goal of breaking ground in mid-August, and in the meantime, keeping up the fundraising.