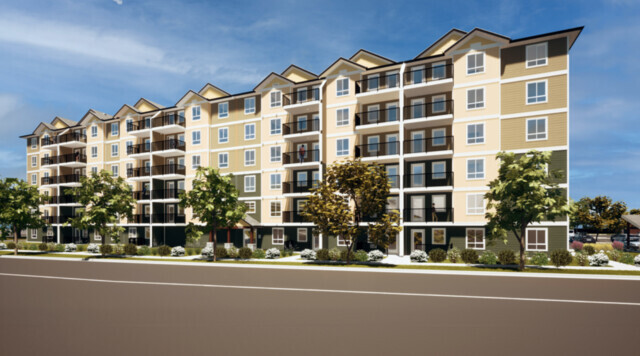 Public pressure against a proposed 151-apartment development in Penticton appears to have done what was intended, as city council voted not to give a second and third reading to a bylaw amendment Tuesday afternoon.

The 1.5-hectare home and parklike-property in question at 435 Green Avenue West was owned by the late philanthropist David Kampe.

Broadstreet Properties had a plan for a two-building, six-storey apartment complex, which the City of Penticton took to the public for preliminary consultation and, most recently on Monday night, at an open public hearing Zoom meeting discussing the matter.

At the Monday meeting, ten members of the public chimed in, none of whom had anything to say in favour of the development. Many raised concerns about change of character, increased traffic and construction noise in what is currently a predominantly single-family home neighbourhood.

"I understand that development has to happen, but this is just overwhelming, this change. 151 apartments? Are you serious?" said Anna Cameron, a resident near to the property.

"I'm nervous at the thought of basically having to move out of this house and go through that process to avoid it," said Michael Mordak, another nearby resident.

Some public feedback included a suggestion that the property be preserved as a park, but city staff pointed out that the property was not left to the city in David Kampe's will — making it a public park would require purchasing it first at a price tag of $4.5 million.

At Tuesday's council meeting, Penticton's director of development services reiterated to council that staff believe the proposed apartment complex is the right next step given a housing crisis in the city, and that a zoning amendment bylaw for the location to allow the development is recommended.

"There is going to be more development in this area,” Blake Laven said. “This is a very unique property. It does lend itself to the type of development that is before council today.”

Council was split in their feelings on the matter.

"I listened with interest to several comments that Mr. Kampe would not be pleased,“ Coun. Judy Sentes said, adding that Kampe was known for his philanthropy and astute business mind, and if he had wanted to leave the property to a specific purpose other than development, he would have.

“For my part, I don’t think he would have been that opposed. In fact I suspect he had a hand in some of it.”

Coun. Campbell Watt pointed to a clear need for housing in the community.

"We don’t have any supply to meet the demand … I think we’re taking the right steps. I think this is a great location for it,” Watt said.

"Acreages have their place. Beside Highway 97 in a congested residential place I don’t think is the right place for a single family acreage,” he said.

"The fact is this property was on the market for seven months and this is the only plan that has reached our table … if we reject this one, how much longer do we wait for the next one to come along?”

But Couns. Katie Robinson and Frank Regehr, along with Mayor John Vassilaki, were in the opposing camp.

"I believe the people who buy and invest their life savings in a neighbourhood … I think we have an obligation to support them on that,” Robinson said, siding with those who spoke up at the public meeting Monday in opposition.

"I do believe it’s going to be harmful not only to the neighbourhood but to the health and the anxiety of the community in that area,” Vassilaki said.

Ultimately, the vote on whether to give second and third readings to the proposed OCP amendment was tied 3-3, meaning it failed.