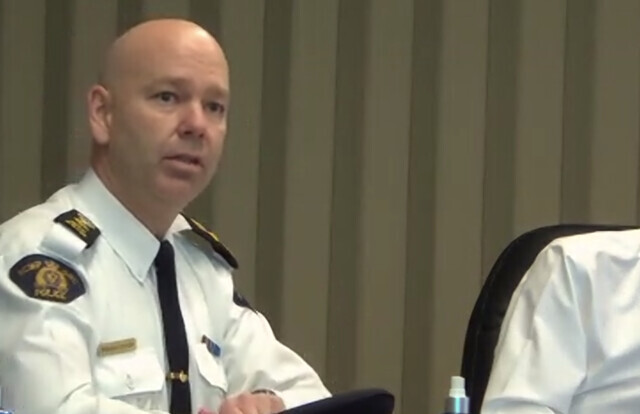 Photo: Contributed
Supt. Brian Hunter appearing via webcast at an RDOS board meeting.

First-quarter crime statistics for South Okanagan-Similkameen communities are in, and Supt. Brian Hunter did not mince words in condemning some of the more alarming trends.

Hunter, along with the detachment commanders for Summerland, Osoyoos, Oliver, Princeton and Keremeos, spoke to year-over-year trends in their specific areas at Thursday's Regional District of Okanagan Similkameen board meeting.

"It's concerning, the level of violence happening in the community," Hunter said.

Specifically, he mentioned a rise in gun incidents, four at the end of March alone. One of those involved his officers, when a stolen vehicle towing a stolen trailer was located west of Penticton. When officers approached, several shots were fired at them.

"I gotta tell you, it's absolutely disgusting, it has a very strong negative impact at the detachment, it's very upsetting. I'm upset, the members are upset, that it's come to this level of violence," Hunter said.

In other detachments, violent crime numbers were more stagnant or had improved, with the exception of Keremeos — it saw a 233 per cent increase in overall violent crime, but Hunter was quick to caution jumping to conclusions based on the percentage change alone.

"When you have extremely low numbers and it goes up by a couple numbers the percentages can seem egregious," he said. In Keremeos' case, the violent crime incidents jumped from six in the first quarter of 2020 to 20 in the same period of 2021.

On another end of the spectrum, Oliver saw a 32 per cent drop in overall violent crime incidents from 73 to 50, and a 56 per cent drop at Okanagan Correctional Centre from 36 to 16.

"COVID has a big influence on that. Their numbers of inmates were down and the [inmate interactions] were down," said Sgt. Don Wrigglesworth, Oliver commander.

Wrigglesworth said he was happy to see those numbers in the green, but noted they can always change quarter to quarter. He plans to make a push for more curfew checks on known offenders who are on court-ordered restrictions, which will increase their accountability and sometimes lead to further investigations.

In Osoyoos, violent crime incidents overall from January to March shifted down from 29 to 28, but sex offences rose from one to four.

"I reviewed those files, two of those were incidents were people were in a common law relationship that was somewhat going sour," said Sgt. Jason Bayda, Osoyoos commander, adding further investigation is underway.

"Two involved care workers at seniors' care home where there was some inappropriate touching by the person being cared for, so that was something we looked into as well."

Many of the detachment commanders shared a common problem with theft from vehicles, frequently linked to unlocked cars or license plate theft, and wanted to urge the public to be vigilant.

In Summerland, where violent crime was down 22 per cent, theft from vehicles rose from seven incidents to 20, and detachment commander Sgt. Dave Preston explained the breakdown: 35 per cent of incidents involved unlocked vehicles, and 20 per cent involved stolen plates.

"A lot of people don't even think to check their license plates but a lot of times criminals will swap and take [them]," Preston said. "Next thing you know, you have a different plate on your vehicle."

Bayda echoed the importance of locking cars. and suggested vehicle owners consider attaching their license plates with a more unusual type of screw so that the average criminal walking around with a screwdriver could not easily take it off.