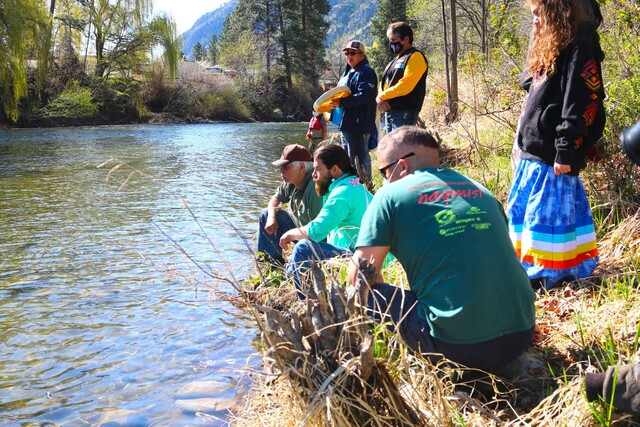 “We are releasing Chinook back into their historical habitat,” says Herb Alec, hatchery building operator for the Penticton Indian Band.

The release — which took place on April 20 — was ceremonial, says Alec. They kept it small, planning “to release a lot more in the coming days and weeks.”

“We’re hoping to achieve the return of the Chinook… big enough numbers that the Okanagan people can go back to subsiding on them, living off them, using them for ceremonial purposes,” he says.

In previous years, the ONA has released Chinook salmon at multiple locations on Syilx Territory — in the Oliver area, along the Penticton river channel and at the En’owkin Centre — to increase their survival rate, he says.

“There are a lot of predators in Vaseux Lake, but this year we did things a little differently,” says Alec. “We raised these fish quite a bit bigger so that they can survive.”

Alec says he’s worked with the hatchery for seven years, and he feels called to be a steward of the water, replenishing fish stocks in the Okanagan’s lakes and rivers as his great-grandfather did.

“My great-grandfather was Martin Louie. He was the Salmon Chief for the Okanagan as well as the upper Columbia,” he says. “I feel like it’s a responsibility being passed down.

“Any time we bring fish back, it’s important to the culture.”

‘Chinook is one of our four food chiefs’

Thousands of years ago, Alec says sxwxwnitkw was a big fishing site for Okanagan Nation members.

“It is culturally significant and that’s why we had a ceremony on it,” says Alec.

sxwxwnitkw translates from nsyilxc?n, the Syilx language, to English as “little falls.” Chief Clarence Louie of the Osoyoos Indian Band says the place has a cultural connection to the Kettle Falls in Washington state.

In 1915, Louie says the colonial government wrongfully took sxwxwnitkw under the McKenna–McBride Royal Commission, without input or agreement from the Osoyoos Indian Band.

“This was our reserve number two,” says Louie. “[The government] took away a lot of reserve lands and this one was one of the most important fishing grounds for our people.”

Overall, this commission had a “significant impact on Indian peoples’ reserve land base by adding to, reducing and eliminating reserves throughout the province,” according to a summary of the commision by the Union of B.C. Indian Chiefs.

“It’s very significant that we have access to our fish at all times,” says Louie.

“Chinook is one of our four food chiefs … It’s part of our heritage and culture and our people fished and gathered here for thousands of years, and it’s our responsibility to make sure the salmon come back.”

The biggest release of Chinook so far

The ONA has been releasing salmon in Okanagan river and lakes to replenish stocks since 2004.

This year, ONA released Chinook at several locations along the Okanagan River, which Snow says is “the biggest release of Chinook we’ve had so far.”

“There’s probably about 25,000 in total that will have been released from the hatchery,” he says.

The Okanagan Chinook population has been “designated as endangered,” says Elinor McGrath, the ONA fisheries biologist. She works closely with the Chinook salmon stock assessment and biological sampling program.

“My role is overseeing and enumeration of the Okanagan River and working on Okanagan Chinook recovery,” she says.

This year, a good portion of the Chinook have been tagged with small tags, she says, so they will be detected when they swim over receivers the ONA has placed at spots along the Okanagan and Columbia Rivers.

“We gain a lot of information on their migration behavior, their timing, their survival, where do they go, where might they be dying and what can we do about it,” McGrath says.

“When they come back in four or five years, we understand more information about their returns.”

The ONA is hoping to learn more about Chinooks’ life history, so that ultimately they can bring them back to their original spawning grounds.

“Chinook are important for our ecosystem and cultural reasons. They’re just amazing what they do,” says McGrath. “So personally, I feel that this is really important to maintain and recover these species.” 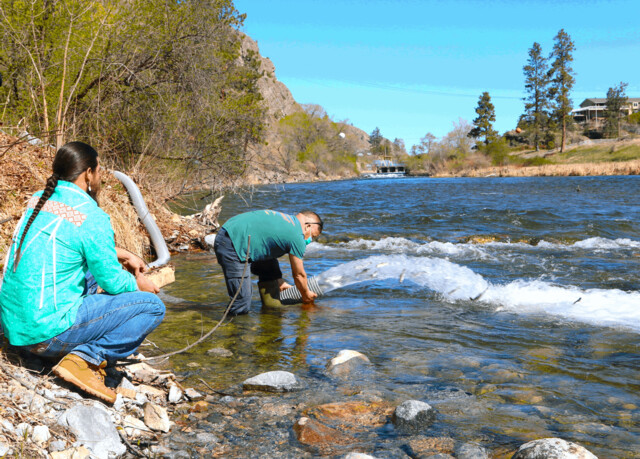