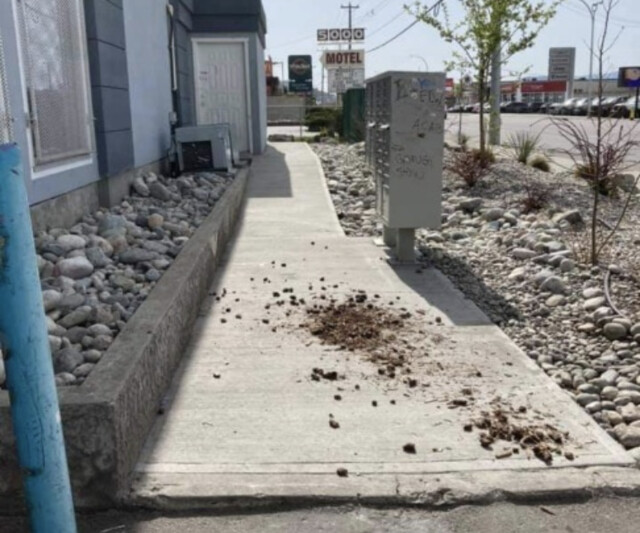 Al Mansfield, Penticton White Spot franchisee, was observed by staff and caught on camera throwing the bucket of poop on the front steps of Compass House Shelter on Tuesday, sparking outrage on social media and disappointment by shelter operators.

In an email statement sent to Castanet, Warren Erhart, President for White Spot Hospitality, stated that "Mansfield has expressed shame and remorse and apologized publicly for what he did at Compass House in Penticton."

"Nevertheless, we acknowledge the extreme severity of this situation and will be conducting a thorough investigation into this matter. Meanwhile, we have asked Mr. Mansfield to step back from the day-to-day operations of his business until we determine an appropriate course of action."

White Spot confirmed Mansfield will be stepping back from all locations he is involved in, which includes Penticton, West Kelowna, Kamloops and Chilliwack.

A Penticton businessman has come forward to apologize for tossing a large pile of feces onto the front step of a homeless shelter on Tuesday.

Al Mansfield, Penticton White Spot franchisee, was observed by staff and caught on camera throwing the bucket of feces, sparking outrage on social media and disappointment by shelter operators.

“It's very disheartening and uncalled for, there's no excuse...We reach out to our neighbours on a regular basis to discuss any problems and issues and this is not the way to deal with it," said Penticton and District Society for Community Living executive director Tony Laing.

Below is an unaltered apology letter Mansfield sent to media late Tuesday night.

I am ashamed and embarrassed by my actions at Compass House in Penticton on Tuesday morning and I wanted to come forward to publicly apologize sincerely to Roger Evans and residents for the hurt I caused. I have already had a conversation with Roger and hope to meet with him on Wednesday to further apologize in person and to see how I can begin to make amends.

I also apologize to the people of Penticton for showing such callous disregard for the homeless residents in our community who are often the most vulnerable and disadvantaged through no fault of their own.

I simply snapped after once again finding human feces near my restaurant and showed inexcusable judgement even though I realized immediately that what I had done was wrong.

There is no justification for what I did, and I apologize to the dedicated teams at White Spot restaurants in the Okanagan and elsewhere. They should in no way be judged by my actions. What I did could not be further from the values of White Spot and showed disrespect for all that White Spot has stood for over the past 90 years and for their many loyal guests.

I know that Penticton is facing a homelessness crisis and requires considerable support to create meaningful change, of which I am committed to being a part of.