Around the world for wine 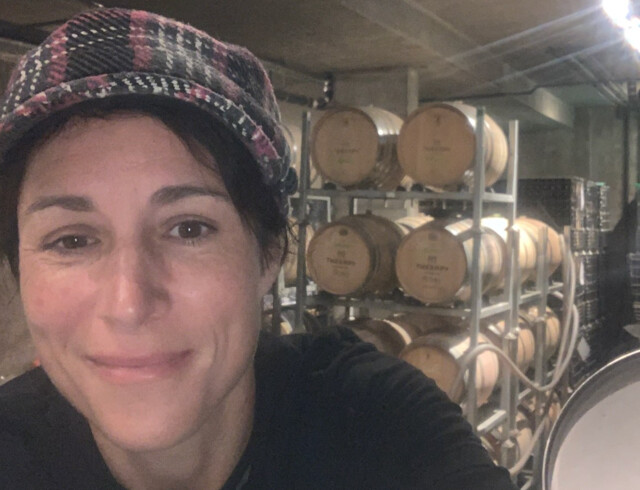 "Okanagan Inspired" is a new weekly series of articles offering a peek into the stories and inspirations of Pentictonites who hold creative roles in the community.

Local winemaker Jacq Kemp is a Pentictonite originally from New Zealand who travelled the world honing her craft, finding what fuels her creativity and the place that finally felt like home.

Kemp is known locally for being the former winemaker for Naramata winery Moraine Estate Winery and the current winemaker for Therapy Vineyards. In addition, she consults for wineries in the region like One Faith Vineyards in Oliver.

“The first time I visited Penticton was because of the skiing and the local wine industry,” she said.

Kemp initially came to Penticton to visit a friend of a friend who had worked in New Zealand, fellow local winemaker Bradley Cooper, whom she stayed with on her visit and still currently works alongside — his wife, in fact, helped deliver one of Kemp's sons.

Kemp worked as a harvest intern her first stint here at Tinhorn Creek, but moved on.

“New Zealand is a flying winemaking community. We are known as flying winemakers, even though Kiwis don’t have wings," Kemp explained.

After working in France, she eventually decided to return to build a family and work as a winemaker. Upon her return she consulted for Tantalus Vineyards in Kelowna and helped establish River Stone Estate in Oliver.

She loves Penticton because it is an emerging city with growing diversity. Living close to the mountains is a huge bonus and she appreciates that it is a bigger city, much larger than most wine making regions.

“It is a fun little city to play and work and live in,” she said.

And her love of wine is deeply rooted.

“I spent some of my childhood in Europe, where wine is a food group," she said, remembering her first time drinking wine from the age of 5. She has moved around from England to New Zealand, Belgium, Canada, France and Australia. Penticton, however, is the longest she’s stayed anywhere at one time.

“The biggest, most important steps I took to become a winemaker is that instead of looking for any placement, I looked for mentors with roots in the original wine industry in New Zealand, France and the Okanagan, and tried to learn from people who fully understood winemaking and the region. I’ve learned from some very strong minded, and pretty amazing people,” Kemp said.

When she couldn’t quite find the right fit she didn’t give up. She sat outside the gate of Sacred Hill winery in New Zealand waiting to talk to the winemaker, Tony Bish, and got herself the job. As a test he gave her the worst grapes of the harvest and tasked her to make wine of it, and she aced it. It was a Malbec and it was her first commercial wine ever.

When asked what is the accomplishment she is most proud of in her career so far, she humbly says: “Seeing the people that work with me move forward in the industry, seeing their growth. I’m grateful to have helped people get a foot in the door and seeing them succeed.”

Her goals yet to come are to make the best sparkling wine in the region and hopes to have them reach an international stage. She also strives to help continuously unite the Okanagan wine region to encourage support of each other, and to work with the educational sectors to ensure students are learning what the industry needs to ensure mutual success.

Winemaking drew her in because of its variations.

"Nothing is ever the same. There are continuously changing factors and it is incredibly challenging. I like to keep busy and enjoy learning. It is a fantastic creative outlet working in the winery and working to ensure environmental sustainability. You produce a product that's creative, but it's more about the people working in the industry than necessarily the product itself," Kemp explained.

Her favourite aspect of winemaking is the interactions within it and seeing it come together as a community, especially within the last 12 months.

“Collaborative efforts and support for each other has never been stronger within the wine industry and the fermentation industry as a whole. We’re better with support, we can’t do it without each other," she said.

During harvest, her favourite song to crank up and sing along to is Jolene by Dolly Parton. She even named her grape press Jolene. “I’m begging of you, please don’t squish my grapes,” she sings.

As for her favourite drink in town, she said: “Actually, I’m really into the craft beers right now,” and she enjoys visiting all the local breweries to see what is new and exciting. Her own new bubbles creation is coming out soon.

Do you know a creative Pentictonite who should be profiled? Email [email protected] to let us know.