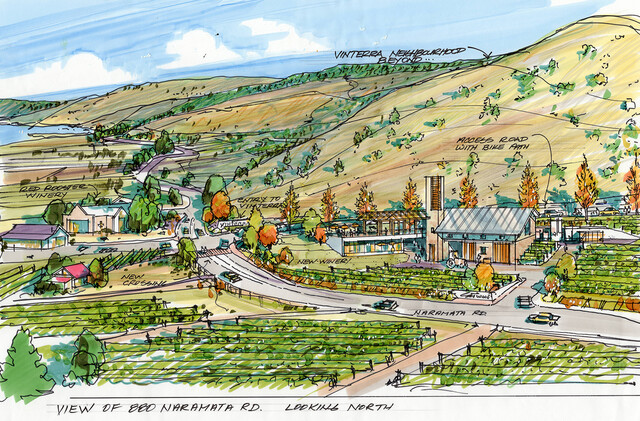 Photo: Canadian Horizons
New concept imagery of a proposed 300-plus subdivision above the Naramata Bench

As Penticton City Council prepares to hear the presentation from Canadian Horizons on their proposal for development above the Naramata Bench, residents may get a chance to voice their concerns or support for the project.

If Council gives the first reading to the zoning amendment bylaw set to appear at the upcoming regular meeting agenda on Tuesday, a community engagement process concerning the proposal would then be underway.

This could begin the multi-step process to determine whether or not 1050 Spiller Road will see a go-ahead for the estimated 307 homes. Canadian Horizons had recently released an updated plan for the development, where some residents responded that they were still opposed.

While the approximately 29ha of a 51ha parcel of land were identified for residential development by the recently adopted Official Community Plan (OCP), council and staff have been waiting for the developer (Canadian Horizons) to complete the necessary components of their development application which - now received - allows Council to consider zoning the lands for the proposed use.

“Should Council pass first reading, staff will follow-up by designing a community engagement process that balances the need to effectively gather feedback from a wide range of voices and perspectives while concurrently hosting accessible engagement opportunities during the current pandemic,” JoAnne Kleb, the City of Penticton’s Engagement Program Manager said in a press release.

“As we prepare and plan, the community is invited to begin to review all of the available reports and materials, discuss the proposal in a City forum and share their suggestions for a meaningful engagement process.”

Over the last year, the City stated they have had success using various online tools to gather information from the community.

The City stated that because of the great interest in the proposed 1050 Spiller Road development and the expectation that many individuals will want to have their voices heard, the City will encourage residents to submit suggestions on how they might like to be engaged by leaving a comment on the forum at www.shapeyourcitypenticton.ca

As for individuals looking for information about the proposed development, including planning, technical and proposal documents and the associated public process, more information can also be found on the same website.

“Pending the passing of first reading, staff will follow-up with further information on key dates for engagement along with next steps,” Kleb said.