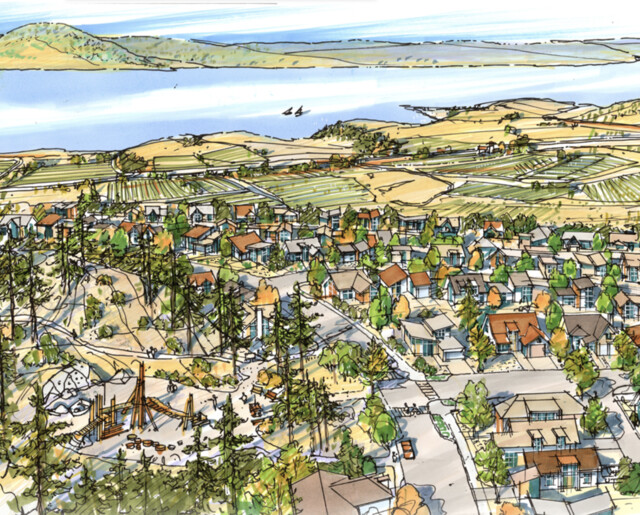 Photo: Canadian Horizons
New concept imagery of a proposed 300-plus subdivision above the Naramata Bench.

The developer behind a contentious proposed subdivision above the Naramata Bench in Penticton has unveiled some changes to the plans in the hope of winning over some of the locals who have been loudly protesting the concept.

"We had our open house in spring 2020 and that sort of was our first thing, it was supposed to be an open house where everyone came [in person] but since COVID happened we weren't able to do that, so we did the online version," said Nathan Hildebrand, Canadian Horizons vice president.

"It served its purpose but I think a lot of the time with the online open houses, the message isn't relayed the same way."

Hildebrand said they received a lot of useful information nonetheless, with the top five concerns raised being increased traffic, environmental impact, density, impact to agriculture and a general, unspecified desire not to see the development happen.

"We were able to refine a lot of our information through consultation with [city] staff, and I had a lot more consultation with the public after that, face-to-face, phone calls, whatever we could do ... mostly with our immediate neighbours out there, businesses and residences," Hildebrand said.

"We thought it was time to get all the information out so that the public can see the new imaging, what ultimately it is that is being proposed."

Changes include decreased density, from 355 to "about 307" lots, and 100 per cent single-family housing. Conservation and park areas have grown, and the total proposed site will now be "45 per cent preserved," Hildebrand said, either through park buffer or through Endangered Species Act habitats like wildlife corridors and open space.

No further public engagement is planned by Canadian Horizons, with the project now heading into the hands of Penticton city council. Hildebrand said it is his understanding after conversations with staff that council will get its first look at the project at its Feb. 16 meeting, and that staff will be recommending the project be sent to a formal, city-run public consultation process.

Hildebrand said city staff have been providing feedback throughout the process, and he is confident Canadian Horizons' requests align with the needs of the city.

"We've been working on this for so long, so it's not new to me, but I can see for the public that it might come as a shock if you weren't aware of the [Official Community Plan] that was approved in 2019," Hildebrand said. Penticton director of development services Blake Laven previously confirmed that the land is "designed for urban development" in the OCP.

"It is supportable in the OCP, but there's definitely quite a few folks who don't agree with the character, or they don't agree that that's the right location, and I don't think there's much we're going to be able to do to change their minds, but we'll obviously provide all the information and answer their questions and hopefully try to change their mind or at least put them at ease that it's not going to devastate the City of Penticton but rather enhance it and provide much-needed housing over the next ten years," Hildebrand said.

The proposal includes a variety of lot sizes, similar in size to the Sendero Canyon project, and the character of the houses would be a "contemporary farmhouse feel," or a "modern take on vineyards," Hildebrand said, in an attempt to play off existing architecture in vineyards on the bench.

"I know the traffic is a lot of people's concerns, we have done a traffic impact assessment, which came back saying Naramata Road has a lot of capacity, but there will be improvements that need to be done at key intersections (Naramata Road at McMillan Avenue and Government Street at Eckhardt Avenue) heading back towards town," Hildebrand said.

He emphasized that the bill for traffic upgrades, as well as water and sewer systems, will be footed by Canadian Horizons with no cost to taxpayers.

"This is a $100 million investment in Penticton over 10 years," Hildebrand said.

"Thousands of jobs will be created building the houses. It'll be good to hear everyone's comments but we're hoping that after seeing some of the information, it changes some peoples' minds. There is a lot of positives that come from this proposal."

If all goes according to Hildebrand's hopes, meaning approval from city council following the public engagement process, his plan is for shovels in the ground in early 2022.

"But there's a long road ahead," he said.