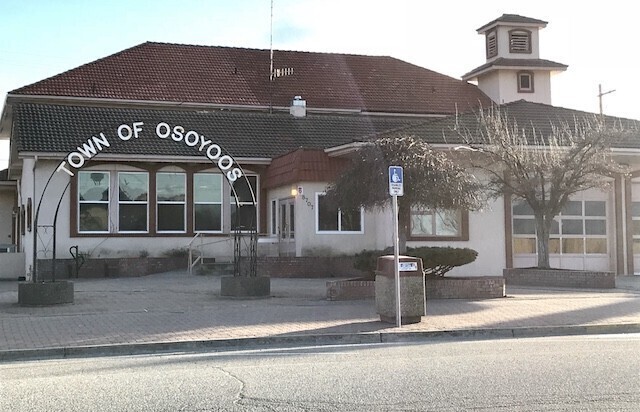 This article is part one of two exploring the history of the Town of Osoyoos as it celebrates its 75th anniversary.

“These compassing hills have known the passing ages
Pathless they hid the tracks of beast and man;
And the dark trees marching the craggy summits
Tall sentinels have stood since time began”

The passage from Janet Anderson’s poem “Osoyoos” opens the book “The Story of Osoyoos: September 1811 to December 1952” by George J. Fraser.

The poem not only describes the timeless beauty surrounding the South Okanagan town, but the coming changes that wake the "guardian" Anarchist Mountain, which hears the “mingled din of workers in the sun; the grind of laden truck; the whining sawmill; The voices laughing when the day is done.”

In 2021, the Town of Osoyoos is celebrating its 75th anniversary as a township, but the human history of the Osoyoos area and the Okanagan Valley begins thousands of years prior to the first contact between European fur traders and the Syilx people in the early 1800s. Around 12,000 people lived in the valley and surrounding areas prior to European settlers arriving.

As Fraser puts it in his book: "Indians are credited today with having been the first people to have inhabited the Osoyoos Valley, but just when it was first inhabited by them is not and probably never will be known."

Much of the written historical record of the area begins after 1811, when David Stuart and a French companion, representatives of the Pacific Fur Company, passed through the valley in September 1811 on their way north prospecting for a better trade route to B.C.'s Interior.

“Basically Highway 3 and Highway 97 are original trails, really Dewdney Trail and the Fur Brigade trail. So that's basically originally why people came here is that it was the intersection of the two trails,” said Kara Burton, executive director of the Osoyoos Museum and Archives, adding that the proximity to the international border was another draw for settlers of the time.

After the Hudson's Bay Company took over the fur trade in 1821, the Okanagan Valley became a major trade route for supplies to inland forts in B.C.

The early days of European settlement and trade would give way to the coming gold rush. In 1859, the largest gold rush in the history of B.C. saw over 500 prospectors from the U.S. and overseas flood into the Rock Creek area.

The rush prompted the construction of the Dewdney Trail in 1865 and brought along with it the establishment of law and order. William George Cox was the first to be responsible for the area as Justice of the Peace and Gold Commissioner.

As the population continued to grow, John Carmichael Haynes (better known as "Judge Haynes") became the head customs collector for the entire Okanagan-Similkameen district in November of 1861.

After the completion of a new customs house in 1865, Haynes and a colleague, William H. Lowe, acquired 22,000 acres of land from the U.S. border to the northern edge of Osoyoos Lake. The acquisition and subsequent land claims would literally shape the towns and neighbouring Indigenous communities in the years to come and was not without controversy.

Haynes is often credited as the father of Osoyoos, one of three founding pioneers, and the "Haynes House" a two-storey, 10-room residence remained a cultural and historical icon as Osoyoos' oldest house until its demolition in 2016.

Haynes along with Theodore Kruger, who established the first trading post, and rancher Frank Richter, would be the first three European settlers in the area.

"So those were the first three Europeans that settled in the area and at that time it was called 'so-yoos' that was already the name that was given to the area by the band and so it was already acknowledged as the area name," Burton said.

However, Haynes' impact on the history of Osoyoos has been recounted from at least two very different perspectives.

Any history between the Osoyoos Indian Band (OIB) and the surrounding communities starts with the "Haynes rip-off," according to OIB Chief Clarence Louie.

"That guy stole over 4,000 acres of our reserve land. White people think he's a hero, they need to know their history and call him a land thief," Louie said.

The original reserve boundary set in 1877 was along the old Okanagan River with the current river channel boundary differing after it was straightened in the 1950s.

"Anything east of the Okanagan River should have been Osoyoos Indian Reserve land that Judge Haynes stole from us. We ended up having to settle what's known as the Haynes (Land Agreement) in the mid-nineties. Most of that land is all privately owned, so we weren't going to get the land back. We'd rather have the land back, but we weren't going to get it back," Louie said.

Chief Louie had made similar comments while giving a speech to an Osoyoos Rotary Club meeting in 2015 regarding the renaming of what was then called Haynes Point Provincial Park (now s?i?s Provincial Park). His comments prompted a letter of rebuttal to the Osoyoos Times from Elizabeth Haynes, the great-great granddaughter of J.C. Haynes who noted the 1865 Land Ordinance which allowed European settlers to purchase the land, claiming her ancestors did so legally, and highlighted the long-entangled relationship between the Haynes family and their Indigenous neighbours.

"The Haynes family’s door has always been open to anyone who ever needed a warm meal, blanket and/or a safe place to stay," Elizabeth wrote in 2015, on behalf of the Haynes family. "Ironically, members of Chief Louie’s own family have resided in the Haynes family home, eating and staying with them for a period of time. Not only do the Haynes descendants have Native blood running through their veins, they also consider many of the OIB members to be some of their closest and dearest friends."

The majority of reserves in B.C. were allotted after the province entered the confederation in 1871. The formation of the Joint Indian Reserve Commission (IRC) in 1876 was intended to resolve land disputes like those between Haynes and Lowe and the OIB (at the time called the Inkamip Indian Reserves).

Haynes and Lowe "endeavoured in the early 1870s to establish a large stock ranch in the immediate vicinity of the reserve and were thus in direct competition with the band," states Duncan Duane Thomson's 1985 thesis "A history of the Okanagan: Indians and whites in the settlement era, 1860-1920."

In 1875 Haynes and Lowe each applied to purchase roughly 1,000 acres of land which included all the valley land on both sides of the Okanagan River. When commissioners from the IRC arrived in 1871 they decided to enlarge the Inkamip Reserve by allotting all vacant Crown land east of the river.

The document stating the decision reached the office of the Chief Commissioner of Lands and Works in May 1878 and "by a blunder," the clerk preparing the document incorrectly labelled townships.

"The evidence seems to lead to only one conclusion: the Inkamip Indians were cheated out of land which had been assigned to them by the IRC and Commissioner Sproat by an unholy combination of dishonest and grasping landowner and government official, J.C. Haynes, acting with a Government which condoned the illegal sale and afterwards steadfastly refused to amend their action," Thomson wrote.

Elizabeth Haynes said in her letter that her great-great grandfather worked alongside and employed numerous Indigenous people on his ranch.

"Upon his sudden death in 1888 from complications due to appendicitis whilst traveling back from Victoria, the Natives treated his body with utmost respect and dignity, wrapping it in blankets and securing it in a dug out canoe (which is still on display in the Osoyoos Museum) for transport home via the Similkameen River," Elizabeth wrote.

This article is part one of two exploring the history of Osoyoos. Watch for part two Friday.