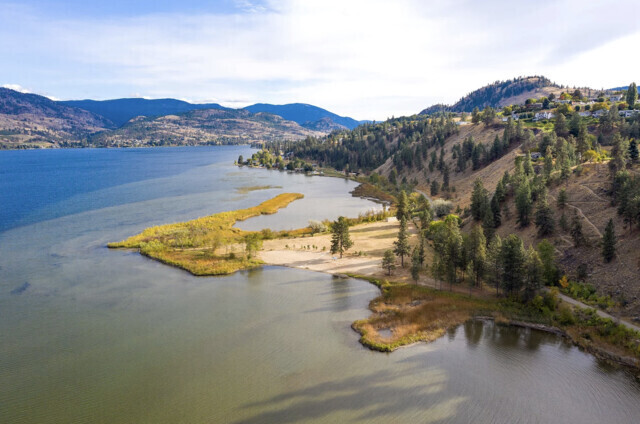 The fight to save Kaleden's Sickle Point from development has come to fruition, almost.

In a press release, the Save Sickle Point Committee announced a $2.5 million joint offer with the Regional District of Okanagan Similkameen to purchase the 4.8-acre area of lakeshore wetlands for conservation has been accepted by the land's mortgage claimant.

“Despite initial pressure to offer the asking price of $3.195 million, we are thrilled that the fair price of the assessed value of $2.5 million has been accepted.  The offer is now dependent on public approval of the required borrowing bylaw and final consent from the Supreme Court of B.C., in this court-ordered bankruptcy sale,” said Randy Cranston of the Save Sickle Point Committee.

“The accepted offer now opens the door to powerful fundraising efforts. Numerous potential donors have been waiting for assurance that the fair offer would be accepted before stepping forward to contribute.”

Currently, the Committee has raised $284,350 in pledges toward the purchase, and they hope to raise the entire $2.5 million without having to lean on the RDOS for funding.

But as the sale stands, the RDOS will be footing the bill, conditional upon taxpayer approval which is being sought at a virtual town hall Wednesday, as well as through community surveys.

After a lengthy public consultation period with Kaleden residents that lasts until Feb. 8, the RDOS board will know whether they are able to move forward with borrowing the funds necessary, which could download about $1 million in taxation costs to local property owners in the Kaleden Recreation Service Area.

The Committee hopes to bring that number down through increased fundraising, now that a tentative deal is in place.

“We recognize this is a lot to ask of our small community at this time,” said Doreen Olson, committee member.

“However, future generations will thank the far-sightedness of the community for preserving this last area of beautiful lakefront and natural habitat for everyone’s enjoyment rather than allowing it to be privately purchased and developed.”

The Committee is also working to secure funding commitments from the Province, federal government and local industry groups.

They have until 2022 to raise the full sticker price before RDOS residents start paying through taxes, as no taxation changes will be in place for the community for 2021 in relation to this deal.

For further information or to make a pledge for Sickle Point, click here.