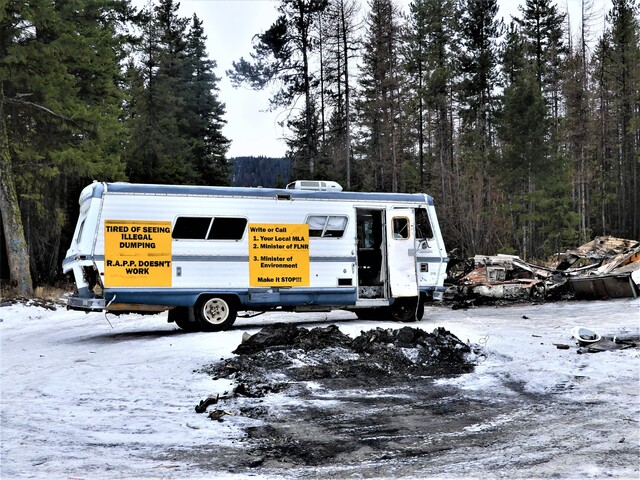 Throughout the 10,400 kilometres squared that the Regional District of Okanagan-Similkameen covers, no authority exists for the administration or regulatory enforcement of abandoned vehicles on highways, road rights-of-way, forest service roads, Crown land or Indian reserves for the municipality to use, according to a staff report the board of directors will receive Thursday.

“The growth in the number of abandoned vehicles in, or adjacent to, our unincorporated communities is problematic and the numbers and types of complaints registered with our Bylaw Enforcement Branch is growing,” the report reads.

Research has presented that the overlapping, missing or often confusing, jurisdiction on enforcement authority or responsibility in these cases is often a contributing factor.

And one local cleanup group focused on looking after the Carmi area is finding increasing difficulty in getting these abandoned vehicles looked after.

Neda Joss, the organizer for the Carmi Recreation Trails Facebook group said it’s getting frustrating seeing the increase of illegal dumping continue and no improvements coming from the provincial or local governments.

“My issue is not with them doing that necessarily, my issue is eventually they leave and they leave all their garbage up there and we have to clean it up. Lately, they've been leaving their RVs, trailers and their motorhomes up there and it's a huge problem.”

While the RCMP, Ministry of Transportation & Infrastructure (MoTI) and Forests, Lands and Natural Resource Operations (FLNRO) are the main contacts for vehicle removal, the regional district is looking at being able to provide a consistent response regarding its role in enforcement.

FLNRO states that the Ministry of Environment (MoE) Report All Poachers and Polluters (RAPP) phone line is the tool for reporting abandoned vehicles on Crown land, including a forest service road, without a Vehicle Identification Number (VIN). Outside the RAPP phone line (1-877-952-7277), the online RAPP reporting and the BC Wildlife Federation app are encouraged and deemed easy to use.

But Joss says she has been using the RAPP line to report the abandoned vehicles, but sees little being done.

“There's another trailer it was left up there, you're allowed 14 days to stay on Crown land and on day 14 we sent off our RAPP report, people finally left in November because of weather and it's still up there.”

RCMP procedure dictates that complaints about abandoned vehicles within a road right-of-way should be referred to the RCMP non-emergency line and their power is defined in the Transportation Act. Vehicle ticketing, and towing the abandoned, unlicensed and illegally parked vehicles falls under RCMP enforcement.

“We made numerous reports on this...nothing seemed to have been done with it. There was no effort to have them remove their trailers.”

While the RDOS Illegal Dumping Program covers landfill fees for refuse collected in a community clean-up on Crown land, derelict vehicles, trailers, or anything with a VIN number cannot be accepted at the landfill and cost to remove refuse or abandoned vehicles are not covered.

“RVs and motorhomes have to be completely dissembled before bringing it into the landfill,” Joss said, explaining that means taking off all the siding, the glass, any parts that could be recycled. “We got a quote of $4,800 to haul it out and recycle it...who's got the money to spend on that?

“It all relies on volunteers and if we could even get them out of there, we have no place to take them, and that's when RDOS comes in.”

Vehicles located on private property half under the Land Use Zoning Bylaws or Untidy and Unsightly Premises Bylaw enforcement, which will be referred to Bylaw Enforcement Services.

For vehicles located on crown land or forest service road, the recipient of the complaint depends on whether a license plate or VIN is present.

The BC Wildlife Federation receives the complaints when blocking public access, including blocking access to a public road, by a vehicle.

Vehicles left on a highway or road-right-of-way involves co-operation between the RCMP, MoTI and a towing company for the Highway Scenic Improvement Act.

However Joss thinks there needs to be more co-operation done, adding a branch or organization that would help volunteer groups with the removal.

“It just seems to land on volunteers to get the work done and it's completely frustrating.”

She also added a part of the solution could start when people first purchase an RV or trailer.

“There should be some recycling tax when purchasing an RV or trailer, a charge to help develop a proper facility to recycle these vehicles when they need to be,” she said.

“It's an ongoing problem and it's getting worse.” 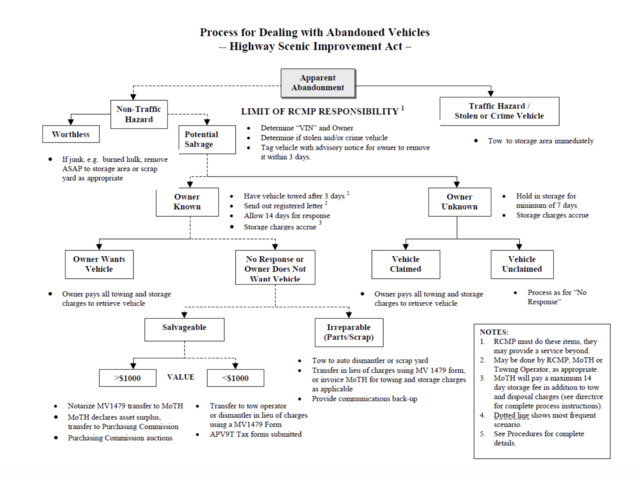