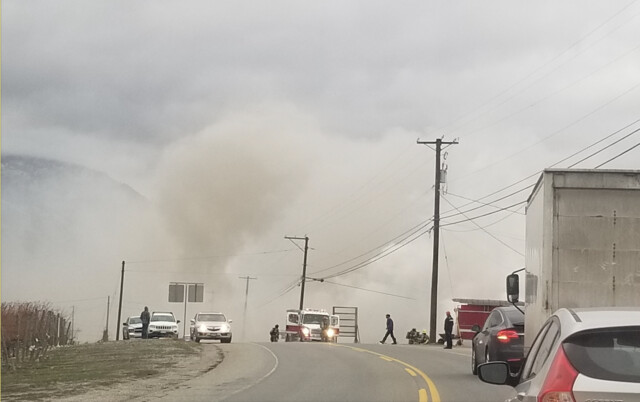 Crews have cleared out and Highway 97 is fully reopened after the roof of a fruit market was fully engulfed by flames on Tuesday afternoon.

A call came into the Oliver and Osoyoos fire departments just before one p.m. with reports of a fire showing at the Saran Fruit Market, according to Rob Graham, fire information officer with the Oliver Fire Department.

The property owner of the fruit stand was on scene, whether they were inside at the time of the fire is unknown, and no injuries have been reported.

The cause of the fire is yet to be determined following the investigation .

The Highway was closed to allow crews to work.

"Hard work by crews on scene," Graham said. "Osoyoos sent a water truck to help out as it was a rural fire."

The Osoyoos crew did also stand by in case Oliver needed some addition help.

The fire was put out sometime around three p.m. according to Graham, but the prospects for the building don't look good.

"At this point the building is probably a total loss on the amount of fire damage," he said. "There are still walls standing, but it would take some significant work to rebuild."

DriveBC has announced that Highway 97 is reopen.

Highway 97 is now clear between Road 18 and Road 20 following a fruit stand blaze.

DriveBC says to still expect delays in the area.

The structural fire has restricted access for vehicles over 19,000 kg. A local detour is available but not accessible for commercial truck traffic.

DriveBC is reporting that Highway 97 is closed in both directions due to the fruit stand structural fire between Road 20 and Road 18.

The closure is running for 1.4 km of the highway, about 7 to 9 km south of Oliver. Watch for traffic control.

A local detour is available.

Heavy smoke can be seen near Highway 97 between Osoyoos and Oliver Tuesday afternoon, where a fruit stand has caught fire.

The Oliver fire department is currently responding, where fire chief Bob Graham stated they’re in the midst of fighting it.