The 2019 killing of four Penticton seniors was described as “cold-blooded,” “calculated” and “methodical,” while having “all the hallmarks of an execution-style killing."

Brittain told police he was motivated to kill the four neighbours of his ex-wife, due to disputes Katherine Brittain had been having with them for several years. Forsyth described the disputes as “objectively petty.”

Brittain first killed Winter near Brittain's home on Lakeview Street at about 10:30 a.m., shooting him first in the back with a .303-calibre rifle, and then three more times as Winter lay on his back. Two of the three shots were to Winter's head.

“I would suggest that the number and placement of the rounds speaks to the accused feelings against and towards Mr. Winter,” Forsyth said.

Brittain then drove first to the BMO bank to withdraw $200 cash, before driving another 10 minutes to Cornwall Street, where his ex-wife lived, and killed the other three. He shot all of the others first in the torso, and then once they were on the ground, he shot them in the head.

“Looking at the methodical manner in which these murders were carried out, they have all the hallmarks of an execution-style killing,” Forsyth said. “He knew exactly what he was doing ... This speaks to the calculated nature of his actions.”

Due to what Forsyth described as “moral blameworthiness of the highest order,” he said the Crown is seeking a total sentence of life in prison, with no eligibility of parole for 40 years. Until 2011, parole eligibility for mulitple murder sentences could not exceed 25 years, but the law now allows for consecutive murder sentences in certain exceptional cases.

Last year, Kelowna's Jacob Forman was sentenced to life in prison with no parole eligibility for 35 years for the 2017 killing of his wife and two daughters.

Brittain's sentencing hearing is scheduled to continue through Thursday.

“We know Kathy made you do it, you should just man up and tell the truth," Tanya Steele told John Brittain in court Wednesday. Steele's father, Rudi Winter, was one of four people Brittain fatally shot in Penticton on the morning of April 15, 2019.

“Kathy had nothing to do with this," Brittain replied.

“You're a liar," Steele said, to which Brittain answered: “You have no facts.”

The emotional exchange came during the first day of Brittain's two-day sentencing hearing in Kelowna Supreme Court Wednesday. Earlier in the day, Crown prosecutor Colin Forsyth explained how Brittain systematically murdered four of his ex-wive's neighbours, stemming from years-long disputes Katherine Brittain had with several of her neighbours.

After he shot and killed Rudi Winter, Susan and Barry Wonch and Darlene Knippelberg, Brittain turned himself into the Penticton RCMP. During a statement he made to police, Brittain explained he had killed the four people because they had made Katherine's life "a living hell."

Katherine's grievances included issues with water draining onto her property, smoke from a neighbour's chimney going over her property, parking issues and Barry Wonch selling refurbished furniture out of his garage. Many of her complaints were deemed to be unfounded by the City of Penticton.

During his statement to police, Brittain emphasized that Katherine had "no idea" about his plan to kill the four people.

Sarah Young, daughter of Barry and Susan Wonch, filed a civil suit against both John and Katherine Brittain. Just before Brittain announced he would plead guilty last week, that suit was "dismissed by consent," possibly indicating an undisclosed settlement had been reached.

The Crown is seeking to have Brittain sentenced for the second degree murder charge consecutively to the three first-degree charges.

Consecutive murder sentences only became available under Canadian law in 2011, and to date, the longest sentence ever handed down in Canada is life with no parole eligibility for 75 years.

After turning himself in at the Penticton RCMP station, John Brittain told police he murdered four of his ex-wife's neighbours because he believed they had been bullying her.

During Brittain's sentencing hearing Wednesday, Crown prosecutors laid out a timeline of the massacre that took place at two locations.

At 10:30 a.m., Brittain was at his home at 184 Lakeview St. when he noticed Rudi Winter, 71, doing maintenance work on irrigation at a friend’s house across street at 400 Heales.

He grabbed his .303 rifle and walked across the street, called out to Winter, whose back was turned, and shot him in the back as he turned. Brittain shot him three more times while he was on the ground, with the final shot into the head.

Afterwards, he drove to the BMO bank on Main Street and withdrew $200 from an ATM before driving to his ex-wife Katherine Brittain’s block.

After taking a .357 magnum from his trunk, he knocked on the garage door of the home of Susan and Barry Wonch at 2400 Cornwall. They opened the garage, and Brittain walked inside and shot Barry and then Susan twice each. Both of the second shots were to the head.

Brittain then walked next door to the home of Darlene Knippelberg, 75, at 2386 Cornwall. She opened the door and Brittain shot her once in the body and then in her head as she was on the ground.

When a passing motorist stopped after seeing Susan and Barry Wonch on the ground of the garage, Brittain told the motorist, “Move on. The police will take care of it.”

He then drove himself to the police station.

At that point, police were only aware of three victims, but Brittain told officers where to find Knippleberg’s body.

On the evening of April 15, Brittain provided two statements to RCMP, telling officers he specifically only wanted to kill the four victims and not anyone else.

He told police he did it to “stop those people from bothering Katherine.”

After years of hearing Katherine complain about being picked on by her neighbours, Brittain told police he “snapped” when he saw Rudi Winter across from his home and realized he had the means to stop the harassment.

The court heard the neighbourhood dispute between Katherine Brittain and her neighbours dated back years to when Rudi Winter cut down a tree in his yard.

In 2015 she made complaints to the city about the Winters and their property use, but they “were not resolved” to her satisfaction. In 2017, she made a complaint about Barry Wonch running a furniture business out of his garage without a business licence.

She also filed complaints about smoke from the Winters’ chimney coming onto her property, drainage from their property into hers and other alleged property violations.

By April 2019, her relationship with her neighbours was very bad.

He emphasized to police that the murders were his decision and not his ex-wife’s.

The family of the victims was heard sobbing loudly as the details of the murders were read out.

John Brittian has pleaded guilty to a quadruple murder in Penticton last year.

“You understand that you may well spend the rest of your life incarcerated, without being able to apply for parole,” Justice Alison Beames asked Brittain after the charges were read.

“That is correct,” Brittain said.

A two-day sentencing hearing is now underway. There is no agreement between Crown and defense over parole eligibility, with the Crown seeking consecutive parole ineligibility on all counts.

Coverage of the sentencing hearing will continue throughout the day. 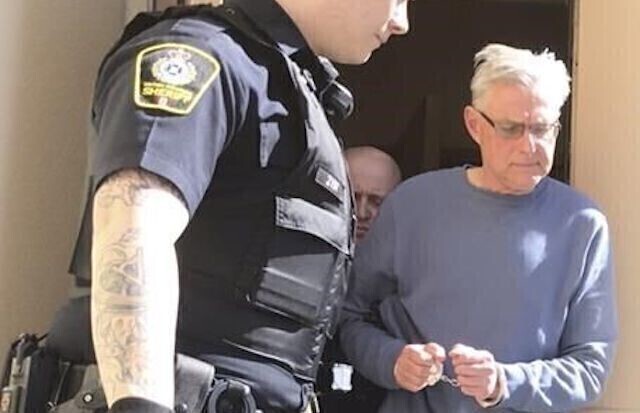 A man accused in a shooting that left four people dead in Penticton is expected to plead guilty in Kelowna today.

A lawyer for 69-year-old John Brittain told a B.C. Supreme Court judge on Oct. 5 that his client intended to plead guilty to four indictments.

Rudi Winter, Barry and Susan Wonch and Darlene Knippelberg were all killed.

The RCMP said the shootings were targeted and the victims, who were neighbours of Brittain's ex-wife, knew one another.

A two-day sentencing hearing has been scheduled for Brittain, who is a former employee of the City of Penticton.