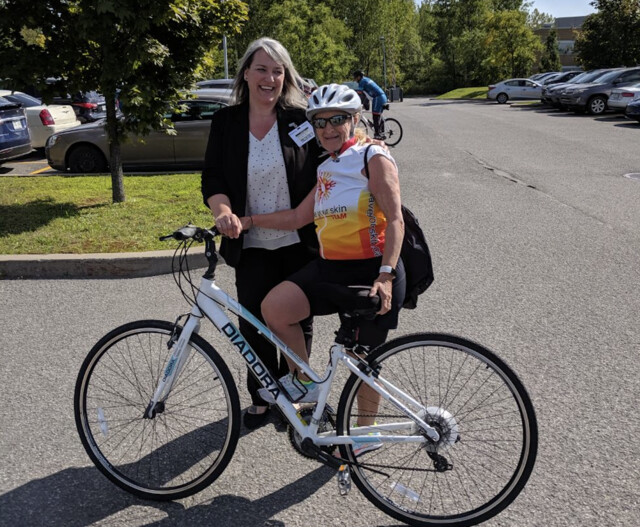 Photo: Contributed
Kathy Barnard (right) during the 2019 Move for Melanoma event, in which she completed a 50km cycle in Montreal

The Save Your Skin Foundation will be hosting its second annual Move for Melanoma activity Challenge, organized by a Penticton local who’s a terminal cancer survivor.

Kathy Barnard was diagnosed with melanoma in 2003 and given just six months to live. She and her family gathered up their savings and went to the US for experimental treatments, where they were able to ship the drug to Canada and receive treatment in Alberta.

By the time she got the treatment in 2005, tumours had spread throughout her body, in her lungs, liver bones and kidneys.

The treatment cost Barnard $40,000 and while she was able to get a complete response against the cancer, she decided she needed to help other be able to have access to the same treatments

“We started my charity in 2006 and the main goal at that time was to get stage four melanoma patients the treatment they needed, which was primarily in the US.”

Now that they've got into clinical trials, Barnard works to advocate for the drugs getting through Health Canada and throughout the provinces.

“I'm happy to see that now we very seldom now have to send any patients outside of Canada,” Barnard said. “We're seeing more and more survivors. We were the cancer that had no treatment and now within five years we've had 15 new treatments come to us.”

All of the funds go directly to patients, whether it’s helping pay for a treatment or pay for gas money to get to appointments. Creating the non-profit and fundraising events for the community not only allows Barnard to raise money for patients in need, but also educate the public

“We're trying to educate people around the dangers of the sun and how early detection is really key and not just melanoma but skin cancer in general.”

While this year's event is a bit different due to physical distancing protocols, Save Your Skin has moved the event virtual, but is still inviting people to move.

Barnard is working to raise $25,000 with her campaign and they are currently 80 per cent of the way there.

"It's really anyway we can help that patient [and[ make that journey any easier."

More information on the event, how to sign up and donate are on the SaveYour Skin website.

- With files from Chelsea Powrie