Cooler weather today is expected to help in the fight against the Christie Mountain wildfire burning at the southern edge of Penticton.

Tonight should also be cooler, dipping down to 15 C.

There have been no updates overnight since the BC Wildfire Service reported making "great progress" on the Christie Mountain wildfire burning at the southern edge of Penticton.

Castanet will be checking in with the City of Penticton, Regional District of Okanagan Similkameen, and the wildfire service, and will update with the latest information this morning.

The BC Wildfire Service says firefighter crews were challenged Wednesday by rocky terrain and heavy smoke.

In an update shortly before 9 p.m., the BCWS said the Christie Mountain wildfire is still estimated at 1,400 hectares in size.

“The fire is burning in difficult rocky sloped terrain with limited access points for ground crews and heavy equipment,” BCWS said. “This afternoon, crews and resources were challenged by the steep terrain as well as visibility. Poor visibility limited the use of fixed wing aircraft to the sections of the fire with better visibility.”

“They made great progress and continued work on the southwest flank of the fire building and strengthening control lines for values protection and in some cases using small scale hand ignitions to remove pockets of unburnt fuel,” BCWS said, but did not offer an estimate on percentage of containment of the fire.

“Forty firefighters will remain on site overnight to work with structure protection personnel and be supported by two water tenders.”

The province says a “Type 1 Incident Management Team” is mobilizing and will be arriving in the coming days from across the province.

The Christie Mountain wildfire has remained very active after dusk.

While the blaze is not glowing with the same intensity as Tuesday night, a Castanet live stream is showing trees candling and as light winds appear to blow towards to the south.

BC Wildfire's last update on the fire at 5:25 p.m. said the fire remains estimated at 1,400 hectares.

The owner of Painted Rock Estate Winery on the now-burning Skaha Bench says the 1,400-hectare Christie Mountain wildfire is about a kilometre from their vineyards.

Like the adjacent Skaha Bluff’s Provincial Park, the winery is closed, owner John Skinner told Glacier Media on Wednesday afternoon. "There are no staff up there. It's really scary."

Helicopters hovered above as Skinner spoke, and he recalled how yesterday evening a saving grace came in the form of fire retardant.

"Very thankfully, last night, when the bombers were out in the early evening, the last four passes of the day were putting down retardant in a line, and that saved us," he said.

Skinner said a line or fire retardant largely stood as a proverbial line in the sand to keep the blaze from crossing nearer than about one kilometre from the winery.

"It had broken the line, but not seriously," said Skinner, who has owned the winery since 2004, and invested millions of dollars into planting 27 acres of grapes using clones and rootstock sourced and propagated from a Bordeaux nursery.

Skinner said that he believes that his grape clusters are safe from settling smoke particles as they are still draped in leaves. The harvest is not slated to take place until October, he added.

"We’re very hopeful," Skinner said. "The fire is on the hill behind us. You stand at Painted Rock and you look at the hill. The smoke isn’t affecting us but its ominously close."

So far just one home, in the Heritage Hills neighbourhood, has been confirmed lost to the blaze.

with files from Glen Korstrom

The BC Wildfire Service says the Christie Mountain wildfire is still estimated at 1,400 hectares in size.

No other additional information was released in an online update posted by BCWS shortly before 5:30 p.m.

Three-hundred-nineteen properties in the Heritage Hills neighbourhood remain evacuated. A single home in the area has been lost. The City of Penticton has 3,669 properties on evacuation alert in the south end of the city, while the RDOS has Upper Carmi residents also on alert. No structures have been lost within Penticton.

Castanet News will be livestreaming the fire this evening, starting at dusk.

Castanet News is awaiting an evening update from the BC Wildfire Service on the Christie Mountain wildfire.

There are currently 86 provincial firefighters being supported by nine helicopters.

"Firefighters are on site working with local fire departments and structure protection personnel. Currently, personnel are working on the southwest flank of the fire putting in control lines for values protection. Four water tenders continue to shuttle water to help with suppression efforts," BCWS said online.

The blaze was estimated at 2 p.m. at 1,400 hectares, but that figure may change later in the day

The homeowners were successfully notified at 1:30 p.m.

The shell of the house was still smouldering as of early afternoon. Nearby homes appeared undamaged. 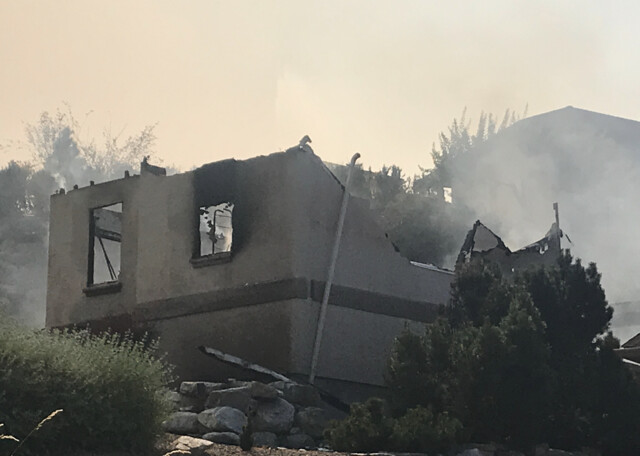 The Regional District of Okanagan Similkameen has confirmed that they are attempting to contact one homeowner in Heritage Hills whose home has been lost to the Christie Mountain wildfire, and local authorities are urging people under evacuation order to take it seriously.

At a press conference Wednesday afternoon, representatives from the RDOS and the City of Penticton fielded questions from reporters.

RDOS information officer Erick Thompson said they are "trying to contact" the homeowner of a property gutted by the wildfire in the upper part of Heritage Hills and hope to have that happen "within the next hour or two."

He also spoke about residents who have proved reluctant to leave their homes, even under order.

"It's so much better if people can cooperate if they are asked to leave," Thompson said. "It's totally understandable why someone wouldn't want to leave home as a fire approaches but it's about life safety."

Potentially needing rescue also puts emergency service crews at risk who may need to respond. He urged everyone under alert to be ready to go at a moment's notice, a sentiment echoed by Penticton CAO Donny Van Dyk.

"We are currently planning for evacuation planning should the alert become an order, everything from route planning, transportation logistics," to reception centres and housing, Van Dyk said.

"It's been a team effort so far, and I think there are longer days ahead of us."

Penticton Mayor John Vassilaki expressed sympathy for those under evacuation alert in the city, a category into which he himself falls.

"Please stay safe and be ready to leave at a moment's notice so they can save all those memories that I'm sure they've collected over the years," Vassilaki said.

Van Dyk said the people in the nearly 3,700 properties under alert will all have a place to go should that change to an order.

"We've already been in contact with the District of Summerland and [CAO Anthony Haddad] sent over a list of facilities in addition to the Trade and Convention Centre, the SOEC," Van Dyk said.  "In addition to that we have [Emergency Support Services working on hotel rooms all the way north of Salmon Arm ... rest assured, should an evacuation order occur, we will have the ability to put a roof over people's heads."

Christie Mountain wildfire is now estimated at 1,400 hectares and wildfire activity is expected to increase as the heat of the day goes on.

The growth from 1,000 to 1,400 hectares is attributed to wind activity. Determining accurate size has been difficult according to MacDonald, due to heavy smoke in the air.

"The wind is favourable, away from town at this time, but we are moving into the hottest and driest part of the day," MacDonald said.

As the afternoon progresses fire activity is expected to increase due to the heat.

Castanet will have a live-streamed press conference with Mayor John Vassilaki and RDOS board chair Karla Kozakevich.

And update from the RDOS Wednesday indicated that 110 people were assisted by the local Reception Centre through Emergency Support Services overnight Tuesday.

Castanet reporter on scene Casey Richardson has confirmed that at least one home has been destroyed by the Christie Mountain wildfire.

The home is in the upper area of the Heritage Hills development and appears completely gutted.

Castanet will not be releasing images or further details about the location at this time.

Join Castanet for a live press conference at 12:30 p.m. between the City of Penticton and RDOS with further updates.

Castanet is expecting a joint update on the Christie Mountain wildfire evacuation order and alert situation from the City of Penticton and the Regional District of Okanagan Similkameen around 11 a.m.

In the meantime, RDOS information officer Erick Thompson is reminding the public that both the evacuation alert and evacuation order areas are closed to the public.

He also urges boats on Skaha Lake to stay well clear of the east side of the lake to allow water skimmers to do their work.

Those on evacuation alert can pre-register with Emergency Support Services online here, and Thompson explained that anyone who is pre-registered but has a place to stay with family or friends does not need to report in person to the help centre at 199 Ellis Street to receive benefits, as they can receive help electronically.

Castanet will also be live-streaming a joint press conference with more information from the City and RDOS at 12:30 p.m.

An update from BC Wildfire Wednesday morning indicates the Christie Mountain wildfire is still estimated at 1,000 hectares.

Overnight, 21 firefighters worked with fire department and structural protection crews to continue guard construction on the South flank of the wildfire.

Additional resources are expected throughout the day.

Fire departments from across the South Okanagan have been called in to protect structures in the path of the Mount Christie wildfire.

“The sun rises. It was a long night,” said the OK Falls volunteer fire department on Facebook.

“Many areas of the fire saw some beneficial wind direction overnight, and some good progress was made. We hope conditions are favourable today, and that the heat and winds of the day don’t whip things up. Waiting on air support. Thanks to all those in the community who have offered words of support.”

The fire, last estimated in size at 1,000-hectares, has forced 319 properties in the Heritage Hills neighbourhood to be evacuated. The City of Penticton has 3,669 properties on evacuation alert in the south end of the city, while the RDOS has Upper Carmi residents also on alert.

The Oliver Fire Department said a page for assistance went out at 1 a.m. for most of the South Okanagan fire departments, leading the OFD to send a water tender to support the engine already on scene.

The Penticton Fire Department has been deploying up structural protection units since the fire broke out at 2 p.m. Tuesday. Anarchist Mountain Fire Rescue said on Facebook it also sent crews.

BC Wildfire has yet to issue a morning update on the fire. 21 provincial crew members were on site overnight.