Refill without the waste 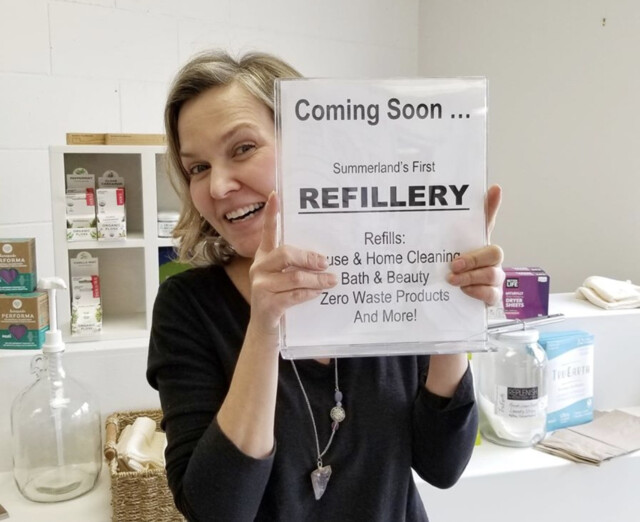 Photo: Contributed
Angela Machuik has a first-of-its-kind business in the South Okanagan.

A new Summerland business is aiming to take the plastic waste out of buying cleaning and personal hygiene products by letting customers refill their own containers.

Angela Machuik is launching Replenish Refillery, a one-stop shop for household cleaners and personal care items like body lotions and shampoos — but you have to bring or buy your own re-usable container.

She models the vision after similar stores on Vancouver Island and in the Lower Mainland, hoping to fill a niche here in the South Okanagan.

"It is becoming more popular, but there's nothing from West Kelowna right to the border, there's nothing out here," Machuik explained. "We're going to start [in Summerland], and I'm looking for space in Penticton."

The store, which operates out of Beadtrails Experience Store, aims to be zero-waste. She offers glass jars and receptacles for purchase, or customers can bring their own clean containers to fill up and pay per 100-millilitre portion.

"It's not a big money maker. What it's about is alleviating the plastic," Machuik said. "There are companies that have food in bulk, but [I've found] there's nothing for cleaning products, shampoo, conditioners, that kind of stuff."

She works at a hair salon, and sees the excess plastic being used week after week.

"You see people coming in buying bottle after bottle and you think, 'There's gotta be something to be done.'"

Macuik will be building her stock in the store leading up to an official grand opening, likely on April 2, to be open by Earth Day later that month.

She hopes to open in a permanent location in Penticton soon, too.

In the meantime, keep up with Replenish Refillery here.