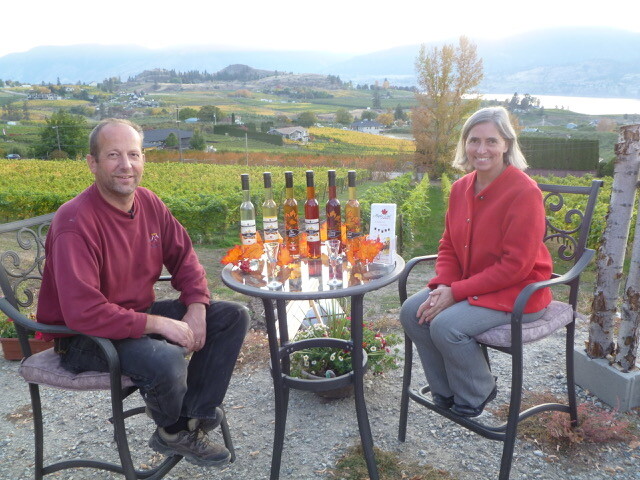 Photo: Contributed
Jorg and Anette Engel had a long journey as immigrants to the South Okanagan to where they are now as owners of Maple Leaf Spirits.

Jorg Engel was just 12 years old when he told his parents in Stuttgart, Germany that one day, he would move to Canada and become a lumberjack — a promise he kept, and then some.

Jorg and his wife Anette are the proud owners of Maple Leaf Spirits on the Naramata Bench, but their road to becoming pioneers in the Okanagan distilling world began with a backpacking trip in British Columbia when both were young.

They loved B.C. but didn't find a place they wanted to call home until four years later, when they returned to the region and discovered the South Okanagan. They came to Penticton and knew that this would be their new home, and in 2001 they moved and stayed for good.

Jorg was a master cabinetmaker, which was not exactly the lumberjack he envisioned, but still working with wood.  His cabinet shop, creating beautiful German-style furniture, was a hit. Jorg taught a number of apprentices and brought a few more master cabinetmakers from Germany to share their knowledge.

Anette was taking care of their three children.  She remembers how she was impressed with the way the local schools welcomed their children and offered special ESL programs to help them learn English and integrate.

“Happy children, happy mom. Happy wife, happy life," said Anette with a chuckle.  Anette worked with the South Okanagan Immigrant and Community Services (SOICS) for some time, and has been a friend and supporter of newcomer services ever since.

Life was good but there was a challenge that Anette and Jorg were trying to tackle. They saw so much fruit wasted in the orchards and knew they had to do something about it.

In Germany people bring their fruit to distilleries, so the Engels started looking for a distillery in the region but couldn’t find one. “Aha, here is a business opportunity," they thought.

They were one of the first two distillery license-holders, and the regulatory body created a special process for them to import the equipment from Germany.