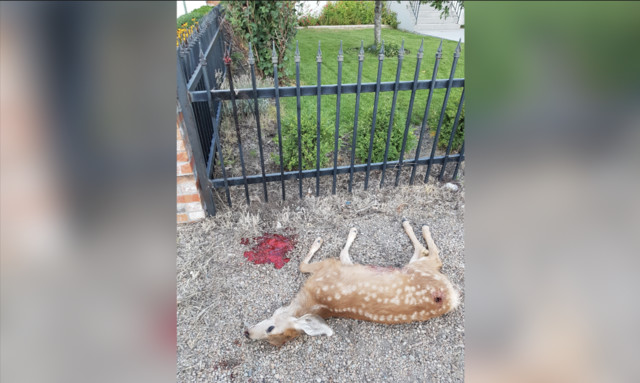 A Penticton man has had enough with the number of deer in town after waking up to the gruesome discovery of an impaled fawn on a neighbour's fence this week.

Gary Young of Haynes Street woke up at 6 a.m. and spotted the grisly sight, with a doe nearby.

"When I looked out that window hung up, it went right through his stomach and up through his back," Young said, saying authorities were called to have it euthanized.

Young's wife took a photo of the unfortunate fawn before it was taken away.

He said more needs to be done to limit deer in urban areas.

"I like them, they are a beautiful little critter. But they are in the wrong place," Young said. "They live right here, they are born right here in the city now, they never know what it is to live in the wild, it's really sad."

The City of Penticton recently rejected a proposed urban deer cull to deal with what some residents have called overwhelming numbers of the animals.

As for the manner in which this fawn died, impaled on an iron spike, conservation officers have been vocal in the Okanagan Valley in favour of a ban on those types of fences.

Earlier this year in Kelowna, CO Ken Owens told Castanet "we see some of those wrought iron fences that have the double rails on the top, deer will jump over there and get hung up and break a leg."