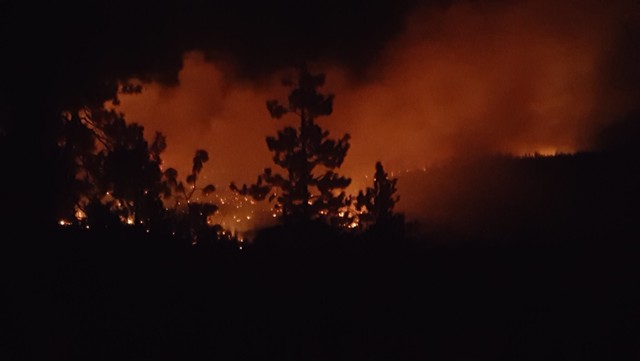 Photo: SORCO
The view right behind SORCO at the height of the Eagle Bluff fire.

Dale Belvedere still gets emotional when she recalls the days that a wildfire threatened SORCO, the rehabilitation centre for birds of prey where she lives and works.

"We are lucky the buildings are still standing here," Belvedere said. "It's hard, and we're still not quite out of danger."

The centre was under evacuation alert for the better part of a week due to the Eagle Bluff wildfire. SORCO chose to preemptively evacuate the premises, taking all of the resident owls and raptors with them. Luckily, some were ready to go back to the wild.

"We released four. They were ready to go anyways that week, we had it all scheduled out. It just forced us into releasing them a little sooner," Belvedere said.

The fire is now listed as held, and Belvedere says SORCO is just trying to get back to normal life after so much upheaval. She says Houdini the great horned owl, a longtime resident and spokes-owl for the centre is home, as well as Pluto the burrowing owl. Others will be returning soon from their temporary homes in Kamloops.

"We're trying to get back to normal," Belvedere said, adding that their rescues are already back underway — two new birds came in this week.

She says the one thing the rescue could use in terms of donations is perhaps not what you would expect.

"We use a lot of towels," she said with a chuckle. "We drained all my lockers, we have five lockers with towels, and we used them all on that Sunday night, and right now we have none! We put them in cages when a bird is injured to make them comfy cozy."

If anyone has extra towels they want to donate to the birds at SORCO, call 250-498-4251 for more information on how to drop them off.

Belvedere wanted to express her heartfelt gratitude for the ongoing work of the fire crews keeping SORCO safe.

"I don't know how these guys and women do it, I just don't. I have the utmost respect for them. I thank them from the bottom of my heart for saving us, because I really didn't think two weeks ago Sunday that we would be standing here today."