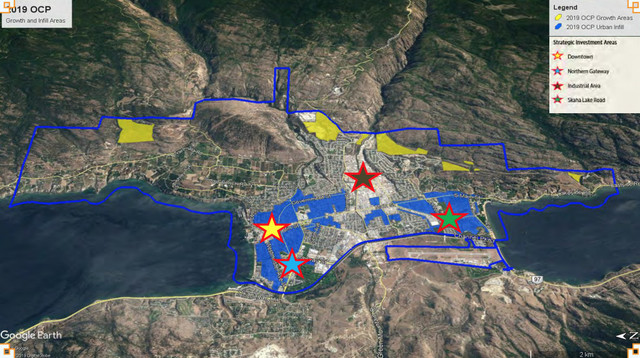 After 2.5 years of work, the City of Penticton has adopted a new official community plan, although the process ended up costing much more than originally anticipated.

The new OCP will guide Penticton’s development over the next 25 years, during which time the city is expected to grow just 0.6 per cent a year — 4,450 homes will need to be built by 2045

The plan will see focus shift from hillside developments to infill housing of established neighbourhoods through the construction of duplexes, carriage homes and building out empty lots.

The creation of the OCP entailed numerous open houses and public consultation initiatives.

The City said this week the whole process cost $261,000, which included $166,000 for consultants and the remainder spent on public consultation.

The city’s original calculation, however, did not include staff time.

Special projects manager Ben Johnson was hired in 2016 to guide the OCP process at a salary of $120,000 a year. During question period Tuesday, director of development services Anthony Haddad said Johnson spent about 70 per cent of his time on the OCP, with the remainder going towards things like the south block annexation last year.

“It proved that it was more of a complex OCP than what they imagined to begin with, in order to put something in place that’s proper,” said Mayor John Vassilaki, adding the city “didn’t spend enough time” on the 2012 update of the OCP.

“It took a lot longer than they expected it was going to take,” he said, noting he wasn't on council when the budget was set.

Regardless, Vassilaki said in a news release Thursday he’s happy with how the process unfolded, adding the new document  "reflects current best practices in achieving sustainable and smart grow for a community like ours.”

The adoption of the OCP was delayed by Vassilaki last month, but he said Tuesday before voting to approve the plan that all his concerns had been address by city staff.

The full document can be found here.