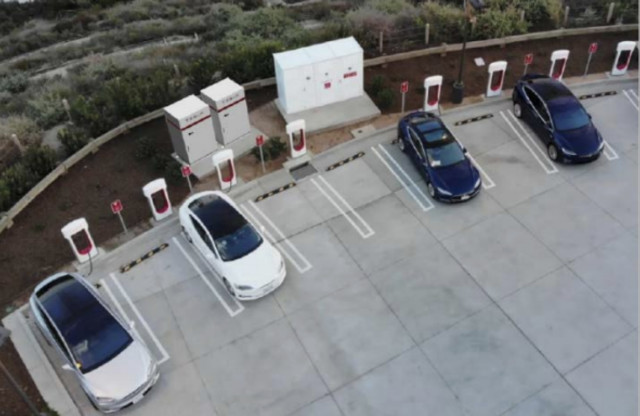 The Town of Osoyoos will soon have 16 slick new electric vehicle supercharger stations thanks to a gift from Tesla.

Given Osoyoos' location at the crossroads of Highways 3 and 97, it has been identified as a "key link in the chain of electric vehicle charging stations within the province," senior planner Don McArthur told town council Tuesday.

He said Tesla approached the town with the offer of eight Tesla supercharger stations and eight universal chargers to enable non-Tesla owners to charge as well.

"The universal charging stations will have a similar charge time as the existing universal chargers at Gyro Park (2-6 hours)," McArthur said. "All construction and maintenance costs associated with the project will be paid by Tesla."

The eight superchargers will go in the municipal parking lot on 74th Avenue at 85th Street, an area McArthur characterized as "under-utilized" and close enough to downtown for users to be able to walk there and shop or eat while their vehicle charges. Four of the spots will be reserved just for Tesla drivers.

The other eight universal chargers will be split between that same location and another location downtown that has yet to be determined. One site under consideration is the new museum parking lot to help drive traffic to the facility.

McArthur said the opportunity perfectly meshes with town goals of revitalizing the town centre for local businesses and with the provincial Climate Action Revenue Incentive Program of which they are a part.

Councillor C.J. Rhodes was very supportive of the project, citing a long history of illegal parking, campers and general underuse of the lot on 74th Avenue.

"It's a valuable piece of property, it's in our downtown area, and the intended use of the property has never been brought to fruition," Rhodes said.

Mayor Sue McKortoff praised the plan, especially as part of a coalition of mayors from communities along Highway 3.

"In order to try and increase tourist use along Highway 3 rather than having everybody speed up Highway 1, one of the things that's been a big push from our group is to have electric vehicle stations so that people can meander through and know that they can charge their car as they go," McKortoff said. "There are many, many, many now between Hope and the Alberta border. This will just add to the pool we have."

Fortis BC will also be adding a new charging station soon at the Petro Canada on Osoyoos Indian Band land.

Council passed the motion to accept the Tesla stations, and Tesla will begin site surveying in July ahead of installations later in the summer.