Colin Dacre - Jul 2, 2019 / 10:49 am | Story: 260184
Chelsea Powrie
The creation of a South Okanagan national park reserve reached a milestone Tuesday, with the signing of an agreement that outlines the park’s working boundary and roadmap for negotiations moving forward.

Federal Environment Minister Catherine McKenna was joined by provincial counterpart George Heyman and Chief Clarence Louie of the Osoyoos Indian Band and Chief Keith Crow of the Lower Similkameen Indian Band in Osoyoos for the signing of the memorandum of understanding.

“For generations, people have lived, ranched, worked, hiked, biked and camped in the South Okanagan and Similkameen Valley — and Indigenous peoples have lived on this land and stewarded it since time immemorial,” said McKenna in a news release, thanking the other parties for signing the MOU.

The working boundary announced Tuesday encompasses about 273 square kilometres of landscapes including Mt. Kobau, Spotted Lake and the Kipoola area. The federal government says the region is home to 11 per cent of Canada’s at-risk species (30 in total), including badgers, snakes and various birds.

The MOU also includes interim protection of provincial lands until a national park is established and develops a framework around issues such as negotiation and cooperative management. property will not be expropriated for the creation of the park and will be added on a willing-seller basis. The boundary of the park still needs to be finalized through further negotiations.

The proposed national park has been a polarizing subject for South Okanagan-Similkameen communities, with many opposed to its creation over concerns about a loss in access to the backcountry for activities like hunting and off-roading.

Opponents of the park have been calling for a referendum of the plan, something Parks Canada has said is not on the table. The agency said in May a final decision and creation of the park is still likely years away.

The MOU is not legally binding and can be exited by any party with 60 days notice. The full MOU can be found here. 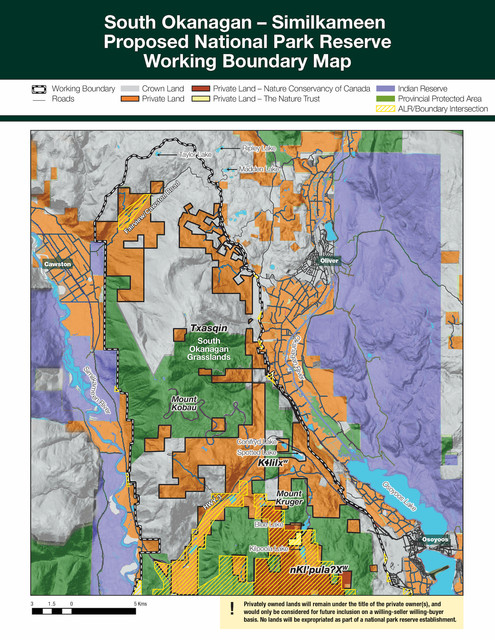