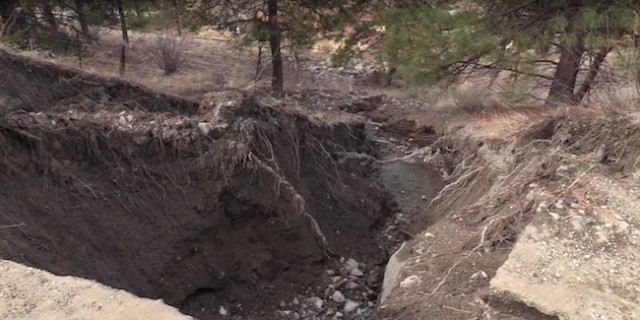 Photo: Castanet Staff
Part of the KVR trail came down onto a home on Gammon Road during heavy rain in March

An extensive review of water management issues surrounding a pair of developments in Naramata has cited inadequacies in the design of drainage systems and maintenance of ditches along the KVR trail as contributing factors behind erosion and landslides experienced by downhill residents.

The provincial government commissioned Tetra Tech to audit the area’s water woes in the wake of a rainstorm in March 2018 that sent a deluge of dirt and debris downhill from the Kettle Ridge and Outlook subdivisions.

Naramata couple Alex and David Lea are suing the developers over the situation, a lawsuit that has now blossomed into a 10-party legal battle.

The Tetra Tech review published online points out deficiencies in the separate water drainage systems at the two developments.

The system designed by Ecora at Kettle Ridge was supposed to be able to handle a one-in-100-year event by storing water on-site in ponds and slowly releasing it for infiltration in a ditch along the KVR trail above the impacted homes.

“Using an unlined ditch that was intended to infiltrate water at the top of a slope above people’s homes is not typical practice,” the Tetra Tech report states, explaining the design relies on the capacity of the KVR ditch with no contingency built into the system.

“When the capacity of the KVR ditch was exceeded, the water eroded the KVR trail and flowed on to the Lea property,” the report continues, noting the poor vegetation-filled condition of the KVR ditch.

The audit also found the designers of the Kettle Ridge drainage system erred by not considering the overall stormwater catchment area and only calculating the area of new development. Highly permeable rocks were also used as fill, allowing water to bypass ditches and retention ponds.

Similar shortcomings were identified with the McElhanney-designed stormwater system at the adjacent Outlook subdivision, such as storage capacity calculations being based on containers being empty when a storm occurs rather than partially full due to recent rain or snow melt.

The system also lacks a fail-safe when it backs up, causing it to overflow towards the KVR trail.

“The storm water management system at the Outlook Development takes water from multiple sub-watersheds and routes it to the southwest portion of the development. The system results in more water infiltrating faster than water would naturally infiltrate in this area. This is overloading the natural system,” the report states.

The Tetra Tech report identifies numerous causes of the excess water, including the lack of connection of the KVR ditch to an actual storm water system, under-designed drainage systems, bedrock pushing septic-field water to the surface and more.

While the report doesn’t single out any one cause, it does appear to conclude that the issues of runoff and erosion impacting downhill residents are not natural and have the potential to exacerbate.

“The water management issues in the vicinity of the KVR not only have an impact on the nearby properties, but also have the potential for cumulative effects closer to Okanagan Lake. This is due, in part, to the additional water being contributed to the watershed through irrigation and septic field use. Of particular import are the sensitive lacustrian deposits (sedimentary rock) closest to Okanagan Lake. These are particularly susceptible to erosion and/or failure if excessive quantities of water are reporting to them.” 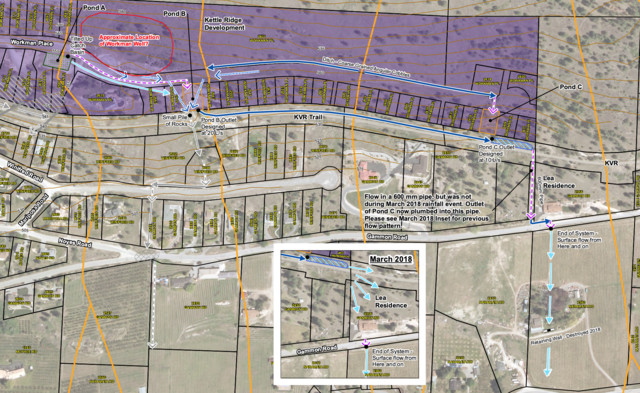