A two-year study has identified Shuttleworth Creek as the primary source of an increase in sediment that is slowly filling Vaseux Lake.

The Regional District of Okanagan Similkameen recently published the study conducted by Larratt Aquatic, which calls on government to take steps to restore the tributary that flows into the Okanagan River at Okanagan Falls, just north of the lake.

The study makes reference to a washout in May 2018, that forced dozens from their homes, as carrying “enough sediment into Vaseux Lake to cloud the entire lake and reduce water clarity to near zero.”

“The large sandbar at the north end of Vaseux Lake changes shape with each freshet but has grown significantly within the past 10 years forming a new island in the process,” the study continues. “Restoration of Shuttleworth Creek is essential if continued rapid expansion of the sandbars in Vaseux Lake is to be minimized.

The study was originally launched in an effort to understand what is delivering nutrients to a perceived increase in invasive milfoil and observed filamentous algae growth in recent years.

Researchers actually found that milfoil beds in 2017 and 2018 were actually smaller than when they were mapped in 1979, and Eurasian milfoil was found to be a “minor component” of the native species and dominated the lake in 2017.

They recommend government work on limiting the flow of nutrient-rich sediment into Vaseux Lake, as it provides a strong foundation for milfoil to grow on. Filamentous algae blooms did not occur during the two years of the study, so researchers say monitoring should continue.

Previous research has determined that the Okanagan Falls wastewater treatment plant has not had an impact on the chemistry or biology of Vaseux Lake.

If government cannot afford to restore the banks of Shuttleworth Creek, the study suggests the sediment trap at the end of the waterway be expanded significantly and be emptied out every summer during low water.

Risks associated with rototilling, or physically removing the milfoil, include damage to native species and issues around heavy metals found in sediment samples. The lake is also a migratory bird sanctuary, complicating things further.

The research also found that the engineered wetland north of Vaseux Lake that the RDOS funded last year in an attempt to improve water quality will likely quickly clog with sediment if Shuttleworth Creek is not restored first. 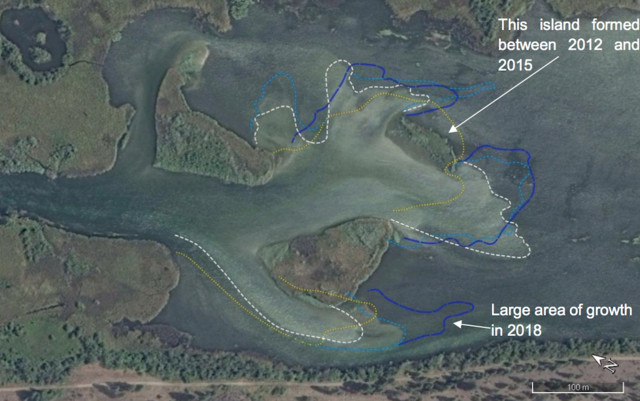