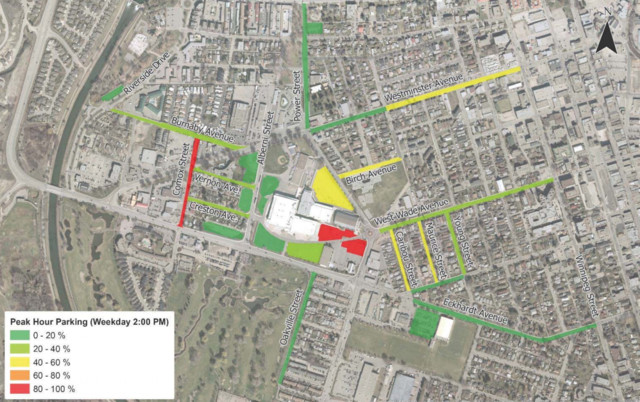 Within the next five years the City of Penticton should re-configure and optimize the parking lots at the South Okanagan Events Centre as well as construct new lots to keep up with increased demand driven in part by the new Cascades Casino, according to a comprehensive study before council next week.

The final draft of a 68-page study on parking around the SOEC suggests a multi-level parkade is not needed yet, and many spaces can be freed up for less money.

The report found that two of the busiest lots on the complex, the community centre and the curling club, can be increased in size by 19 spaces and 13 spaces respectively with a simple re-configuration. The project would include the removal of the unused Queen’s Boulevard entrance and would cost a combined $172,000.

The report also recommends the city expand parking options to the west, by expanding the existing Eckhardt Avenue lot and installing a new lot on Creston Avenue. Combined the new lots would add 72 spaces and would cost $480,000.

In the short term, the report recommends in 2019 the city implement 2-4 hour parking at the community centre, initiate time-restricted permit parking on surrounding streets, improve signage and install new crosswalks on the campus.

“SOEC parking pressures have increased over the past several years due to introduction of the casino and a general increase in traffic to the various business and services on site,” the report states.

The study found that the SOEC site has a parking shortfall on 19 spaces, mostly due to the casino complex and community centre. But when nearby parking lots on Alberni Street are counted, there is a surplus of nearly 300 spots.

The new signage would aim to inform motorists of walking times to the SOEC, as the outlying lots are mostly completely unused unless an event like a hockey game or concert is underway.

The report leaves the possibility of a multi-level parkade on the table — at a cost of $35,000 per stall — but said it should be a longer term vision to be initiated as part of a larger project.

Council will discuss the report during its meeting Tuesday afternoon.