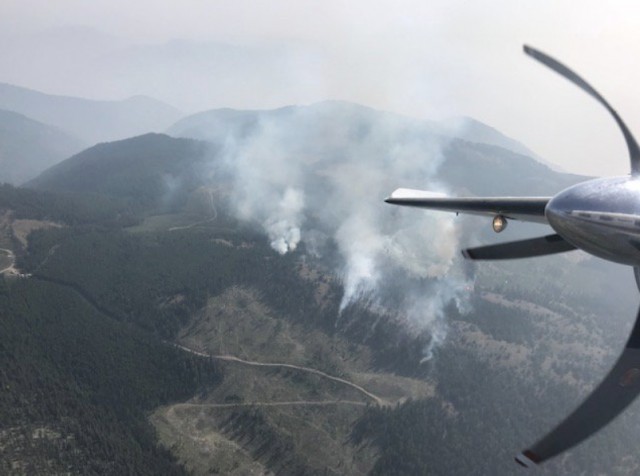 The B.C. Wildfire Service has now classified the blaze burning northwest of Keremeos as a “fire of note.”

The Old Tom Creek fire, seven kilometres west of Olalla was mapped Friday morning at 144 hectares. Forty firefighters are tackling the blaze, supported by 10 helicopters being shared amongst several fires in the Similkameen. Fires "of note" are those that are particularly visible to residents, or threatening structures.

“The crews did a really good job yesterday of getting in some control lines, and we had air tankers out two days ago, they dropped some retardant lines — so the crews were just tying into those,” fire information officer Nicole Bonnet said.

She added that crews have also benefited from some old forest service roads which have acted as preexisting fire breaks, "I don’t think it's seen any growth today that I’m aware of.”

Residents of nearby Olalla and Keremeos can expect to see considerable smoke and helicopter traffic related to the fire. Homes are not being threatened.

Crews are also monitoring the Cool Creek fire northwest of Cathedral Provincial Park. The blaze is estimated at 100 hectares in a very remote area, so crews are still mobilizing. The 13,000 hectares Snowy Mountain fire continues to burn near Cawston, but is now classified as "held."