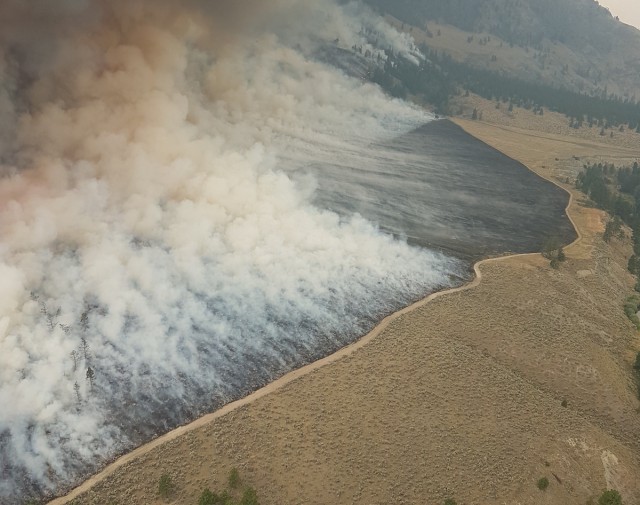 The BC Wildfire Service says some structures, likely outbuildings, have been impacted by the Snowy Mountain wildfire.

An update late Saturday evening says "details are forthcoming" on impacted structures. Fire information officer Bob Cunneyworth says at this point, it's believed no homes have been impacted by the fire, and adds further details should be known on Sunday.

Crews had more favourable weather at the fire today, with cooler temperatures and some rain.

Cunneyworth says, however, crews are wary of night winds, which he says have caused problems the past couple nights.

There are now 80 firefighters battling the blaze, as well as three helicopters and four pieces of heavy equipment.

"Crews continued to work on the southeast flank to protect adjacent properties, and are also positioned on the northwest flank to tie the fire perimeter into rocky slopes to keep it wrapping around the mountain towards the Keremeos area," an update from the BCWS says.

The fire is still mapped at 10,911 hectares in size, making it the largest fire currently burning in B.C.

It was a rough night on the Snowy Mountain fire line.

Not only did persistent winds drive the flames, but two new fires in the area forced officials to divert resources to put those fires out before they became too large.

“It was really busy and aggressive fire activity for our crews that were out there last night,” said Allen, adding the fire is “active during the day and just as active at night.”

“There is still wide-spread evacuation alerts as well,” she said.

BCWS crews were working with the Keremeos Fire Department in the evacuation area to prioritize life and safety first.

“Additional resources were sent, so we had some initial attack crews and officers out of Penticton as well as some staff from the BC Wildfire Service incident management team,” she said.

As of Friday, the fire was estimated to be 10,911 ha, but Allen expects that number will grow today after last night's fire activity.

“Terrain is always a challenge on this fire, there are very steep slopes, but the winds really were the factors that caused so many issues for crews last night,” said Allen. “The winds have been unpredictable both when they are going to start as well as the speed at which they are going to come, so we did have winds coming down slope and from the north at at least 30 km/h last night sustained. We saw very aggressive fire behaviour. It is burning in a southward direction toward the U.S. border.”

To add to the existing challenges, two more fires were reported near the Snowy Mountain Fire.

Allen said the fires are not related to the Snowy Mountain Fire, but were two new fires.

“Our crews that were working the night shift were reassigned to provide that initial attack suppression to extinguish those fires while they are still small,” she said. “It was certainly a challenging night.”
Allen said the cause of the two new fires in under investigation.

Crews will continue to battle the Snowy Mountain fire around the clock.